If you shake hands with Wilbur, count your fingers afterwards

A multimillion-dollar lawsuit has been quietly making its way through the New York State court system over the last three years, pitting a private equity manager named David Storper against his former boss: Secretary of Commerce Wilbur Ross. The pair worked side by side for more than a decade, eventually at the firm, WL Ross & Co.—where, Storper later alleged, Ross stole his interests in a private equity fund, transferred them to himself, then tried to cover it up with bogus paperwork. Two weeks ago, just before the start of a trial with $4 million on the line, Ross and Storper agreed to a confidential settlement, whose existence has never been reported and whose terms remain secret.

It is difficult to imagine the possibility that a man like Ross, who Forbes estimates is worth some $700 million, might steal a few million from one of his business partners. Unless you have heard enough stories about Ross. Two former WL Ross colleagues remember the commerce secretary taking handfuls of Sweet’N Low packets from a nearby restaurant, so he didn’t have to go out and buy some for himself. 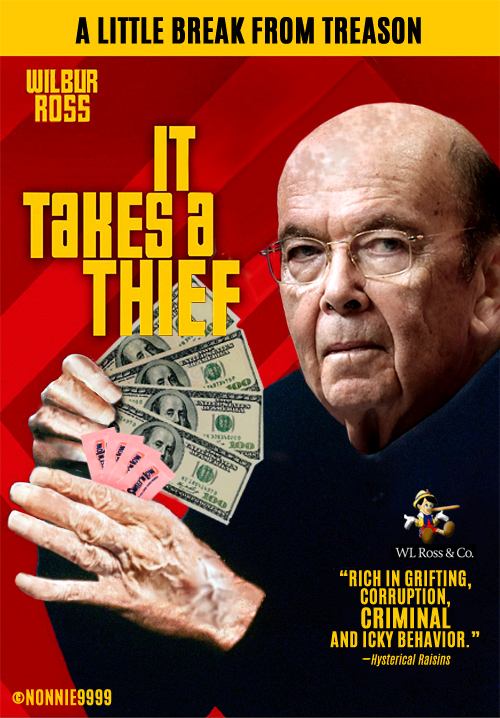 There are bigger allegations. Over several months, in speaking with 21 people who know Ross, Forbes uncovered a pattern: Many of those who worked directly with him claim that Ross wrongly siphoned or outright stole a few million here and a few million there, huge amounts for most but not necessarily for the commerce secretary. At least if you consider them individually. But all told, these allegations—which sparked lawsuits, reimbursements and an SEC fine—come to more than $120 million. If even half of the accusations are legitimate, the current United States secretary of commerce could rank among the biggest grifters in American history.

Not that he sees himself that way. “The SEC has never initiated any enforcement action against me,” Ross said in a statement, failing to mention the $2.3 million fine it levied against his firm in 2016.

Those who’ve done business with Ross generally tell a consistent story, of a man obsessed with money and untethered to facts. “He’ll push the edge of truthfulness and use whatever power he has to grab assets,” says New York financier Asher Edelman. One of Ross’ former colleagues is more direct: “He’s a pathological liar.”

Forbes has previously documented how Ross seemingly lied to us, over many years, launching himself onto, and then higher on, our billionaire rankings, at one point even lying about an apparent multibillion-dollar transfer to family members to explain why his financial disclosure report showed fewer assets than he claimed. “What I don’t want,” Ross said, “is for people to suddenly think that I’ve lost a lot of money when it’s not true.”

Such machinations now seem pathetic. But his billionaire status was not lost on another person obsessed with his net worth. Donald Trump termed Ross a “legendary Wall Street genius” and named him to his cabinet. “In these particular positions,” Trump explained to a crowd of supporters, “I just don’t want a poor person.”

Roughly two months before the 2016 presidential election, the SEC announced WL Ross was paying a fine and refunding $11.9 million it allegedly skimmed from its investors, including interest. The scheme was complex. Like other private equity firms—including several that coughed up money to the SEC around the same time—WL Ross derived much of its revenue from management fees charged to its investors. With funds as large as $4.1 billion, management fees of 1.5% could alone bring in more than $60 million a year for Ross’ firm—serious money.

But WL Ross promised that it would give its investors something like a rebate. For example, when Ross and his colleagues got certain fees for working on deals, they were supposed to give at least 50% of that money back to investors. But, according to SEC investigators, the firm gave back less than it suggested it would and pocketed the difference, leading the feds to conclude Ross’ firm broke laws that prohibit defrauding and misleading clients. WL Ross paid the big settlement but never admitted guilt.

Ross also allegedly skimmed money by serving on corporate boards of his firm’s portfolio companies. Again, the rule was that a portion of the fees that WL Ross employees got for serving on such boards was essentially supposed to be handed back to investors as rebates. Instead, Ross’ firm did not give back enough, according to ex-colleagues. Ross “was like a kid in a candy store,” says one of his former employees. “He pilfered it.”

Click on the link, kids, because there is much more, including how Wilbur signed a sworn document in November 2017 that said he had divested all the assets he swore he would. That was a lie, and lying to federal officials is a crime. Rethuglican Senator John Thune is making some noise about Wilbur and asked the Inspector General of the Commerce Department to look at Wilbur’s holdings, but since Thune is a Rethug, I wouldn’t hold my breath that this goes anywhere. The article also mentions that two senators and a congressman (their names are not mentioned, but after reading another article, I believe the senators are Democrats, not sure about the congresscritter) asked the Securities & Exchange Commission to investigate Wilbur’s ties to Navigator Holdings and insider trading. What’s Navigator Holdings? Well, kids, what story about this administration would be complete without Russia and Vladimir Putin? Yep, Navigator is linked to Vlady. Wilbur also had ties to the Chinese government and a bank in Cyprus that fourteen Democratic congresscritters have asked the I.G. to investigate.

The article ends with a quote from a former colleague of Wilbur’s:

“This is a public servant who can’t tell the truth.”

5 responses to “If you shake hands with Wilbur, count your fingers afterwards”