Rep. Chris Collins‘ son and his son’s fiancee bought shares of an Australian biotech company just days before dumping the shares after the New York Republican allegedly tipped his son off about a failed clinical drug trial in a phone call from the White House lawn, the Securities and Exchange Commission said in a complaint.

Collins’ son, Cameron Collins, and the son’s accountant fiancee, Lauren Zarsky, had purchased the stock of Innate Immunotherapeutics in June 2017 because they believed — mistakenly, it turned out — that the trial of the company’s multiple sclerosis treatment would yield positive results, the SEC said in its complaint. 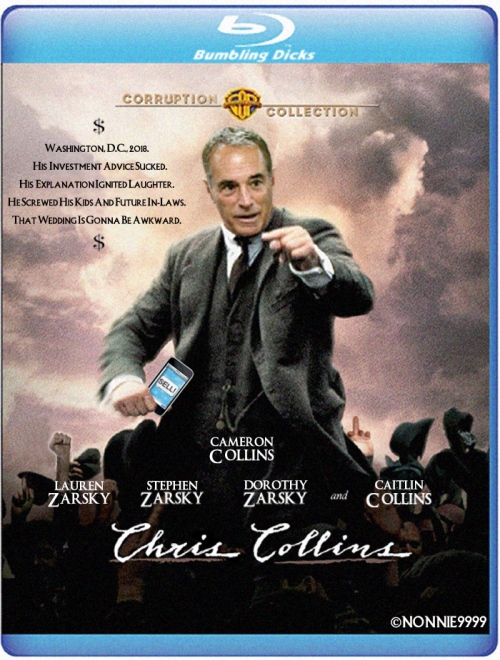 Chris Collins, who represents a Buffalo-area district, had been touting Innate Therapeutics’ prospects for years. At the time, he was a member of the company’s board of directors, even while serving in Congress. Chris Collins also was Innate’s biggest shareholder in early 2016, owning more than 17 percent of the company, or almost 34 million shares.

Cameron Collins and his sister Caitlin were the third- and fourth-largest shareholders, with each owning 2.65 percent of the company at that time, or 5.2 million shares apiece.

The SEC has text messages from the fiancee to her mother Dorothy about buying stock in the company in 2016, explaining that “Cam’s dad” guaranteed a huge profit in the following years. She texted her mom the next day to tell her that Cam’s dad will know how things are going with the clinical trials. So, Dotty and hubby Stephen bought a shitload of shares in Innate Therapeutics. Then Stevie Boy bought even more.

Well, the trial ended the following April, and Cam’s dad found out in June that the directors, including him, would not be allowed to trade any stock, because the results of the trial were going to come out. So, when Cam’s dad says that he’s innocent, because he didn’t sell any stock, it’s because he wasn’t allowed to. In June, Sonny Boy bought more shares in Innate, using money from his 401(k). Five days later, fiancee Lauren bought shares for the first time. She opened a brokerage account the day before in order to do so. This was on June 20, 2017.

Two days later, Cam’s dad and the other board members got an email from Innate’s CEO who broke the news that the clinical trial was a failure. Cam’s dad was at the White House for a congressional picnic at the time, but there was no grass growing under his feet on the South Lawn. Within 15 seconds of answering the CEO, Cam’s dad was trying to contact Sonny Boy.

The next day, Sonny Boy, the fiancee, Dotty and Stevie all started selling off their share in Innate, avoiding a loss of about $768,000. Cam’s dad, Sonny Boy and Stevie were all arrested and charged with insider trading and making false statements to authorities (I think that’s called conspiracy, but I don’t think they were charged with that). They all pleaded not guilty.

Fiancee Lauren and mother Dotty were not charged criminally, but they had to give up the money they made on the deal and pay civil penalties. Finacee Lauren is a CPA, and she agreed to be suspended from doing any kind of business having to do with the SEC.

Let’s just hope that Sonny Boy doesn’t get hurt when Cam’s dad throws him under the bus. It’s going to be quite crowded under there with Twitler throwing Donnie, Jr. under there, too.

But wait, kids, there’s more! According to the New York Post, daughter Caitlin lost $1.3 million when Innate’s stock tanked. She owned as many shares as Little Bro, but her stock was held by an Australian brokerage firm, and under Aussie laws, no shares could be sold until the results of the drug trial were released publicly.

So who wants to be a fly on the wall at the next Collins family gathering, or, better yet, at the wedding?

Oh. and more Rethug congresscritters might be involved! And Eddie Munster…I mean, Paul Ryan had no choice but to throw Cam’s dad off the Commerce Committee. Here’s a better stock tip than any that Cam’s dad might give you–invest in popcorn companies.