Junior folds like one of his father’s cheap suits

Donald Trump Jr. has struck a last-minute deal to comply with a subpoena from the Senate Intelligence Committee.

The two sides have been at odds over the length and scope of the interview, raising questions about whether Trump Jr. would defy the subpoena and be held in contempt of Congress.

According to the terms of the deal, Trump Jr. will sit for an interview sometime in mid-June for between two and four hours, with the scope limited to five or six topics pertaining to his communications with Russian officials. 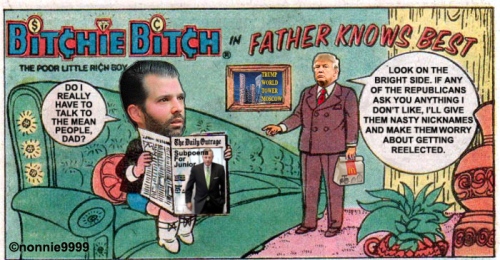 The agreement ends a standoff between Trump Jr. and Senate Intelligence Committee Chairman Richard Burr (R-N.C.), which had split Republicans in the Senate.

The president’s allies were furious with what they viewed as congressional harassment, arguing that Trump Jr. had testified for more than 24 hours to committees in the House and Senate and that Senate Majority Leader Mitch McConnell (R-Ky.) had declared “case closed” on the Russia matter.

McConnell stood behind Burr, but the intraparty split put Republicans in an awkward position with President Trump’s son.