Missouri’s top health official reportedly testified Tuesday that he once tracked the menstrual cycles of Planned Parenthood patients through a spreadsheet.

Dr. Randall Williams, the director of the state’s health department, was speaking before the Admistrative Hearing Commission tasked with determining the fate of the state’s last abortion clinic. He said the purpose of the spreadsheet was to identify what he considered to be failed abortions, according to the Kansas City Star.

With a nod to Another Period and The Knick

END_OF_DOCUMENT_TOKEN_TO_BE_REPLACED

According to a report in the Washington Post, GOP lawmakers in both the House and the Senate have grown weary of having to provide a daily defense for Donald Trump’s actions which may have an impact on whether he is impeached or not.

According to the report, “Republican senators are lost and adrift as the impeachment inquiry enters its second month, navigating the grave threat to President Trump largely in the dark, frustrated by the absence of a credible case to defend his conduct and anxious about the historic reckoning that likely awaits them.”

Summing it up, one anonymous GOP senator said, “It feels like a horror movie.” 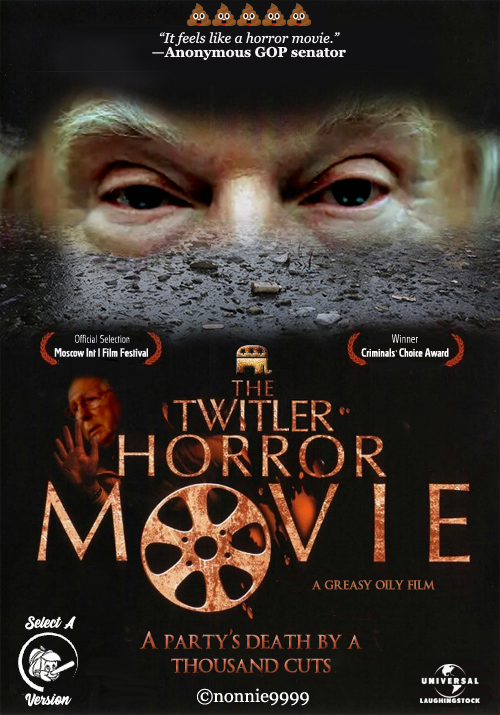 END_OF_DOCUMENT_TOKEN_TO_BE_REPLACED

John Kelly, former chief of staff to President Trump, said Saturday he warned the president before he left the White House not to replace him with a “yes man” because it would lead to Trump’s impeachment.

Kelly also said he believed he could have prevented the current impeachment inquiry against Trump if he had stayed in the job.

Tell it like it is. Twitler doesn’t need or have a chiefs of staff, he has babysitters, and they are doing a shitty job.

END_OF_DOCUMENT_TOKEN_TO_BE_REPLACED

Now Rudy is just phoning his corruption in

From Raw Story via Salon:

Trump attorney Rudy Giuliani has stepped in it — again.

NBC News reports that the former New York mayor earlier this month unwittingly butt-dialed one of its reporters and left a three-minute voice message in which he discussed business dealings in Bahrain and spouted unfounded conspiracy theories about former Vice President Joe Biden.

END_OF_DOCUMENT_TOKEN_TO_BE_REPLACED

President Donald Trump said, “We’re building a wall in Colorado” when talking about border wall progress on Wednesday afternoon. Trump was speaking in Pittsburgh at the Shale Insight Conference when he made the comments.

END_OF_DOCUMENT_TOKEN_TO_BE_REPLACED

“By the way, Matt Gaetz, when did you want to become a TV star?” McCain said. “You want to do that? Get the hell out of Congress. Get a TV job.”

END_OF_DOCUMENT_TOKEN_TO_BE_REPLACED

Unleashing the Gaetz of Hell

Did you see the Stormtroopers…I mean, the Rethuglicans, butt-hurt that the Dems (and other Rethugs) were holding a hearing in which a top Defense Department official was suppose to testify about Twitler’s dealings with Ukraine, storm the closed-door hearing?

END_OF_DOCUMENT_TOKEN_TO_BE_REPLACED

“If the nesting doll fits…”

Hillary Clinton says she believes that the Russians have “got their eye on somebody who’s currently in the Democratic primary and are grooming her to be the third-party candidate.”

In a recent interview, Clinton didn’t mention Democratic presidential candidate Rep. Tulsi Gabbard of Hawaii by name, but said she believes one candidate is “the favorite of the Russians.” Asked if the former secretary of state was referring to Gabbard, Clinton spokesman Nick Merrill said, “If the nesting doll fits…”