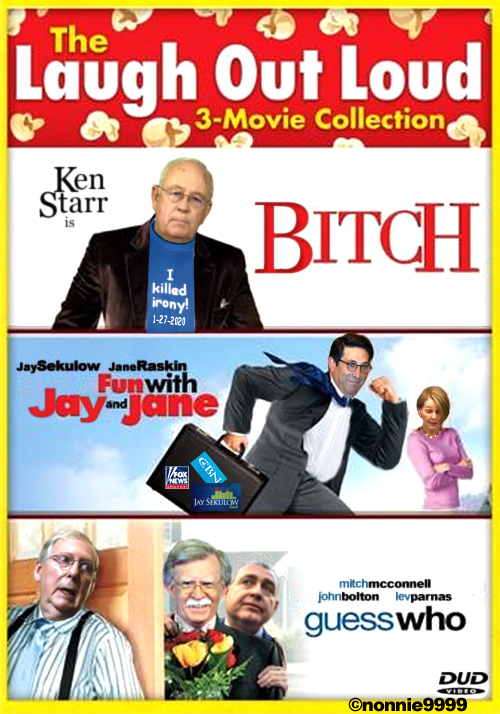 So far, I have not seen any of the talking heads on TV take notice of the multiple crimes that took place on the Senate floor today. Ken Starr murdered irony. Then he desecrated its corpse as he lectured us on how impeachment is used too much these days and for the wrong reasons, not important stuff like blowjobs. I missed what happened next, because I was trying to retrieve my eyeballs from the back of my skull. After poor irony suffered all of that, Bribery Barbie Pam Bondi resurrected poor irony and flogged it to death once more as she complained about conflicts of interest and nepotism pertaining to Joe and Hunter Biden. Once again, I was on eyeball retrieval duty. Forgive me if I am not recalling the correct order of Twitler’s defenders. Patrick Philbin spoke, but I have no idea what he said, because he triggered an immediate coma. There was also Jane Raskin. She was apparently hired as Rudy Giuliani’s defense attorney, because she spoke of little else. She said that Democrats are using FruityRudy as a distraction, but I really think she was just trying to distract us. Eric Herschmann dug up irony once again and chastised Hunter Biden for trading on family connections to make money. He also tried to impeach Barack Obama retroactively. He said a lot of other shit, too, and all with a straight face.

Who wasn’t mentioned even once all day? The mustachioed elephant in the room. From THE HILL:

Bolton’s accusation, made in a forthcoming memoir, that Trump tied $391 million in aid to Ukraine to the country helping with investigations into Democrats — including former Vice President Joe Biden and his son Hunter Biden — ricocheted across the Capitol.

Democrats quickly characterized the allegation as a “thunderbolt,” a “bombshell” and “gut check time” for Republicans, arguing that it underscored the need for additional witnesses and documents.

Republicans, caught flat-footed, struggled to get on the same page, as some GOP lawmakers indicated Bolton’s allegation strengthened the need for witnesses, while others argued the memoir offered nothing that would change the outcome of the impeachment trial.

Sen. Mitt Romney (R-Utah) set off alarm bells for Republicans when he told reporters that he thought it was “increasingly likely” that other members of his caucus would support hearing from Bolton. He threw in the caveat that he hadn’t spoken to his GOP colleagues.

“My thoughts about how we may all react are personal,” he said.

His statement earned him a public roasting by new Sen. Kelly Loeffler (R-Ga.), who previously donated to a 2012 pro-Romney super PAC. She accused the Utah senator of trying to “appease the left.”

But Romney was quickly backed up by [Susan] Collins, who said in a statement that she thought Bolton’s allegations “strengthen the case” for witnesses. Collins reiterated that she will wait until after opening arguments and questions from both sides before she makes a decision but said she is “likely” to support calling witnesses.

Sens. Lamar Alexander (R-Tenn.) and Lisa Murkowski (R-Alaska), two other potential swing votes, were tight-lipped as they made their way through crowds of reporters.

“Well, I read it. I’ve said before I was curious what Ambassador Bolton might have to say, and I’m still curious,” Murkowski said Monday when asked by The Hill about her reaction to a New York Times story about Bolton’s forthcoming memoir.

A rotating cast of Republican senators was spotted going into [Mitch] McConnell’s office ahead of the start of the trial on Monday as the caucus grappled with how to handle Bolton. In addition to normal members of leadership such as [John] Thune and Sen. Roy Blunt (R-Mo.), Sens. Lindsey Graham (R-S.C.) and Mike Braun (R-Ind.), part of a group that’s taken over messaging for the caucus during the trial, were spotted heading into the leaders office.

Monday, the start of the second week of the trial, had been expected to be focused on Trump’s legal team, which is making its defense of Trump after a short two-hour preview on Saturday.

Instead, senators, House managers and Trump allies found themselves besieged with Bolton questions, underscoring how completely he had taken over the debate in the Capitol.

No word on the other elephant in the room, Lev Parnas Gump.