My mom and my sister and I had a new tradition. My mom was in a nursing home, and every Sunday, my sister would pick her up and bring her to my house, and I would make dinner. While we were eating and after dinner, I would turn on Game Show Network, and we’d watch America Says and Family Feud. My mom’s hearing wasn’t very good, even with hearing aids, and she’d answer the wrong questions correctly, and my sister and I would laugh. My mom would ask why we were laughing, and we’d tell her, and she would laugh at herself. When it was time for my sister to bring my mom back, I would ask what she wanted the next week. With a twinkle in her eye, she would always answer the same thing, “Corned beef and cabbage.” I don’t know why she was so enamored of my corned beef, but that was her favorite meal. I don’t remember what I made on March 1st, but it wasn’t corned beef. It was the last time I made dinner for my mom and the last time I would ever hug her, kiss her, touch her and make sure her seatbelt was secure before she left. The next week, I wasn’t feeling well, and the coronavirus had just started to rear its ugly head, so I cancelled dinner, because I didn’t want to give it to my mom if I had it. I cancelled the next week as well, because I was still under the weather.

After that, there were the occasional visits to the nursing home, only through my mom’s room’s window, as the lockdown had begun. Once, my sister was able to see her outside, of course at a distance away. However, the rules were quickly changed back, and there were only window visits after that. It would make her so happy when someone visited her, as so many residents didn’t have anyone. We would yell through the window, and she would look out and see the dog, and she would delight in watching him. There would be the exchange of a thousand I love yous and thrown kisses at the end of the visits. I took the dog to the vet on Wednesday. I decided to stop and see my mom. I usually would have my sister call the nurses and tell them to make sure the blinds were open and my mom was in her wheelchair by the window. The dog was antsy, and I was tired, so I just parked the car and walked to her window with the dog. I saw my mom in bed, and she was awake, so I banged on the window. She didn’t hear me. I kept banging for 5 minutes, but she never looked over and no nurses passed by. I was going to go back to the car and call my sister, but I had another stop to make, and reassured that my mom looked okay, I decided to leave and come back up in a couple of days.

That evening, my sister called me at almost midnight. The nursing home had called her and told her that my mom was complaining of some chest pain and shortness of breath. They sent her to the hospital just as a precaution. Now, my mom can be a bit of a drama queen, so my sister and I hoped that it was just a panic attack. Of course, the hospital would not allow us to visit her. The next morning, we learned that she was moved upstairs to a room, and they were watching her just to make sure she was stable. The nurse said that she probably caught a cold, and that’s why she was a little short of breath. All her other vital signs were good. A little later on in the day, my sister called me. They tested my mom for COVID, and it was positive. She was on oxygen, but her levels were still low. They moved her to a room upstairs. My sister, brother and I had to decide over the phone about whether a DNR should be in place. With too many tears and too much heartbreak, we decided that, should worse come to worst, we couldn’t have anyone punishing her body when there would be little hope. My sister, brother and niece Facetimed with her. She was lucid, but it was hard for her to talk. I couldn’t pull myself together enough to Facetime with her, knowing I might soon regret it. Later on, I still struggled with it and almost called my sister to ask how to arrange it. Then the phone rang. It was 8:32 p.m. A very sweet lady said, “This is Lydia from University Hospital…” I don’t remember the rest of what she said, other than her being very kind as she told me my mom didn’t suffer, and a nurse was with her and holding her hand when she stopped breathing. And that was that.

There were the phone calls and the crying and the shock and everything that goes along with someone you love dying. Then there was the profound loneliness of not being able to hug another person, to be comforted. I was glad that a kind nurse cared enough for my mom, a stranger, to hold her hand so she wouldn’t be alone, so she would be comforted as she left this life, but I selfishly wondered who would comfort me. My brother and my son immediately said they were going to call the airlines and book flights here. I know I must have sounded unhinged as I yelled at them not to come here. “It’s not safe! You don’t realize how bad it is here!” My son is in New York City, so he knows how bad it can be. My brother is in Montana, so it is still an abstract picture to him. I begged and pleaded and demanded a promise that they wouldn’t come here, and they both finally agreed.

My sister, my nephew and I will bury my mom on Wednesday. I will not be able to be next to them or touch them or hug them, but at least they will be close. We won’t have a funeral until this nightmare is behind us. Then, my son, my brother and others who loved my mom can come and grieve and celebrate her life with us. We’ll laugh at how funny she was and at the irony of delaying her funeral, because if there was anything my mom loved, it was a good funeral. We’ll hug and sit together and share a meal. I think I’ll make corned beef and cabbage. 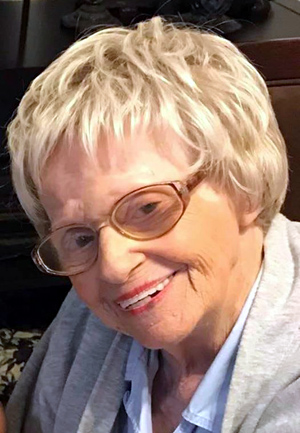 56 responses to “Corned Beef and Cabbage”