Duncan his toe in the grifter pool

END_OF_DOCUMENT_TOKEN_TO_BE_REPLACED

One of my favorite animated shows on television was King of the Hill.  It took place in Texas, so it naturally reminded me of Chimpy.  Since it’s the 10th anniversary of the Supreme Court appointing Chimpy to the preznitcy, it’s fitting we begin with a picture of him (and even more fitting that it celebrates the end of his reign, knowing all the damage he did)… 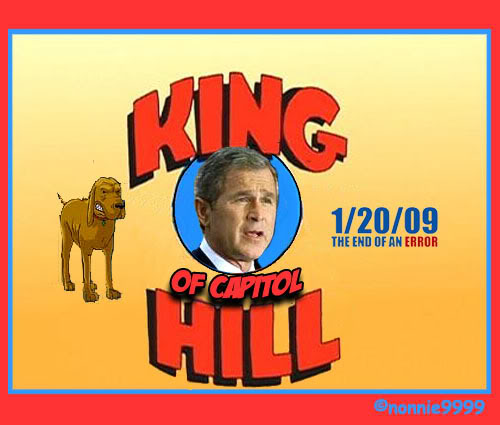 It’s back, kids! The Defense of Marriage Act is being reintroduced! From The Carpetbagger Report:

Just this week, a group of Republican senators re-introduced the Federal Marriage Amendment to the Constitution, which, as we know, would ban gay marriage.

And once again, the language is pretty straightforward:

Section 1. This article may be cited as the `Marriage Protection Amendment’.

But the funny part is looking over the list of the 10 original sponsors. Most of the names are predictable — Brownback and Inhofe, for example — but there are two others whose names stand out: Sens. David Vitter (R-La.) and Larry Craig (R-Idaho).

Carolina on My Mind

From the Kansas City Star:

In South Carolina, which holds its Republican primary Saturday, former Tennessee Sen. Fred Thompson will be in the elimination position.

Having bypassed New Hampshire and Michigan, Thompson is looking to establish himself, at Huckabee’s expense, as the most appealing candidate to social conservatives in the South. “Our campaign is `all in’ in the Palmetto State,” said Thompson’s spokesman, Todd Harris.

MANCHESTER, N.H. (AP) — Mitt Romney and John McCain sparred Sunday over their tax and spending records and who was a better agent for change, in the second Republican debate of the final weekend before the New Hampshire primary.

McCain had the support of 34 percent of likely voters, up from 27 percent in mid-December. Romney was at 30 percent, down from 34 percent, and former Arkansas Gov. Mike Huckabee — the Iowa caucus winner — was third at 13 percent. Former New York Mayor Rudy Giuliani had 8 percent, while former Tennessee Sen. Fred Thompson was in the low single digits.

The jowl meets the scowl, and they are both on the prowl!
The Sucker Lollipop Guild (A guild? That might be too close to a union for a card-carrying Rethuglican!): 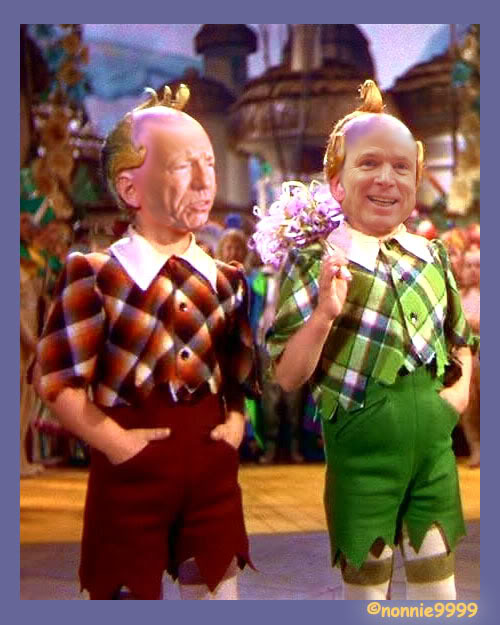 Original photo.
Quarrel and Farty (you decide which one is which):
END_OF_DOCUMENT_TOKEN_TO_BE_REPLACED