King of the Bungle

“What if we went back through all the family trees and just pulled those people out that were products of rape and incest? Would there be any population of the world left if we did that?” King said in remarks supporting abortion bans that do not make exceptions for cases of rape and incest, according to video posted online by The Des Moines Register.

END_OF_DOCUMENT_TOKEN_TO_BE_REPLACED

When the Bats Come Home to Roost

WASHINGTON — Rep. Michele Bachmann, who had more than $2 million in her congressional campaign account at the end of November, is embroiled in a dispute with a former presidential campaign aide over back pay of $916.

In what had been a private matter that has now become a nasty public squabble, Peter Waldron, who served as Bachmann for President national field coordinator, contends he is among five former Iowa staffers whom Bachmann has refused to pay unless they sign a non-disclosure agreement regarding campaign activity in Iowa.

END_OF_DOCUMENT_TOKEN_TO_BE_REPLACED

‘Tis the Season for Such Folly

(CNN) – The avalanche of negative campaign ads from Mitt Romney is wearing on rival Newt Gingrich, but he said Thursday he won’t break his pledge to stay positive.

Speaking to Iowa Public Television, the former House speaker said the onslaught of vitriol coming from Romney headquarters jarred with the spirit of the holidays.

“I think it’s counterintuitive,” Gingrich said. “We have an ad that will come up next week where Callista and I are wishing people a Merry Christmas, and we’re talking in a totally positive way. I think if these guys keep up this kind of negative junk, it’s so discordant with the spirit of Christmas.”

Yeah, let’s keep with the spirit of Christmas by saying that poor kids should have to clean toilets for their richer classmates. 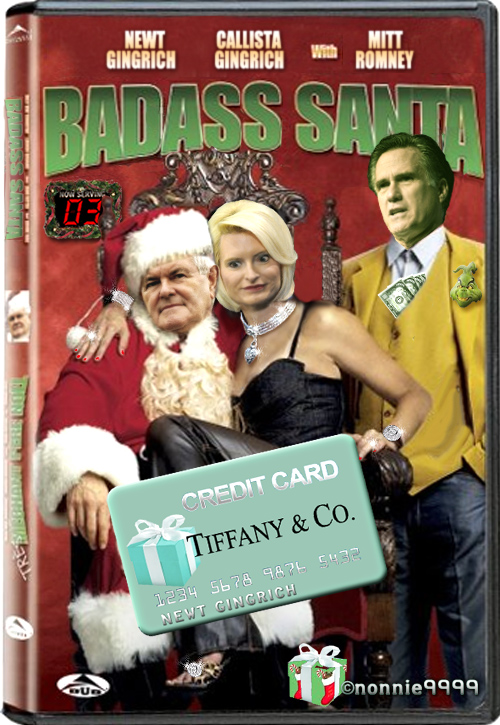 END_OF_DOCUMENT_TOKEN_TO_BE_REPLACED

Putting the Ass in HarASSment

From Dave Wiegel at SLATE:

There are two contradictory rules in politics about how to handle an opponent’s embarrassing scandal.

Door Number One: Pile on. The guy’s not “under fire” unless there are flames on him. In the words of James Carville, “if he’s drowning, toss the sonuvabitch an anvil.”

Door Number Two: Back away. The guy’s on fire: You don’t want to get singed!

The choice that Cain’s opponents are making tells us a lot about how he can move past this. They’re all picking Door Number Two. Rick Santorum, in Iowa, isn’t talking about it. Ron Paul is explicitly saying he won’t go after Cain’s “character.” The Perry and Romney campaigns merely deny that the story came from them.

So who outed Herman Cain?

END_OF_DOCUMENT_TOKEN_TO_BE_REPLACED

At the beginning of the week, I read about the little spat that Botox Batshit Bachmann was having with her ex-campaign manager Ed Rollins. Ol’ Ed was a bit critical about her batshittery about the HPV vaccine causing mental retardation, and he remarked that she didn’t really have a snowball’s chance in Hell after the Iowa caucuses. Well, of course, Botox Batshit Bachmann was quite surprised. She would have looked like it, too, but with all the Botox, she is no longer able to raise her eyebrows. When asked about Ol’ Ed’s disloyalty to her and how he had previously dissed other candidates he had worked for, she said, “I guess I should have done that Google search.” She would have furrowed her forehead at that point, but, once again, the Botox. In response, Ol’ Ed said, “Well, if I would have Googled her, I would have found out she had 6 chiefs of staff in 5 years.”

Well, while they were busy regretting not googling each other, there are some new developments in the Botox Batshit Bachmann campaign ranks.

Cain received 37 percent of the 2,657 votes cast, more than twice as many as Perry, who made the most concerted effort here and captured 15 percent. He scraped by former Massachusetts Gov. Mitt Romney, who did not compete but finished with 14 percent.

“Folks, this is what you call momentum,” Cain, the former chief executive officer of Godfather’s Pizza and a tea party favorite, said in a video message to supporters. “The Herman Cain train is picking up steam.”

I admit, when I think of Herman Cain, I often think of certain things that steam…

Michele Bachmann is ambling through the aisles of a cramped meat locker in an industrial section of Des Moines. Massive sides of beef, weighing up to 950 lbs., hang from hooks near the ceiling and droplets of blood pool on the frigid floor. You can see your breath. Bundled in a blue coat, a string of pearls around her neck glittering in the low light, Bachmann trades small talk and gamely slices slabs of rib eye in the cutting room. “My grandfather owned a meat market in Iowa,” she tells the manager of the family-owned meatpacking plant, which has operated since 1869 and employs six workers. It is a perfectly scripted set piece for Bachmann, whose two-day swing through the Hawkeye State this week is designed to accentuate her blue-collar, Midwestern bona fides, her connection to Iowans and her commitment to the retail politicking it takes to win the state’s first-in-the-nation caucus this winter. When you want to win Iowa, this is the type of place you spend a drizzly Tuesday morning.

END_OF_DOCUMENT_TOKEN_TO_BE_REPLACED

A New York Daily News story published on Sunday set off a flurry of speculation about former New York Gov. George Pataki’s possible 2012 ambitions, and now there are reports from Iowa that Pataki may be poised to enter the race on Saturday.

Pataki has signed on to attend a Polk County Republican Party picnic in Des Moines on Saturday and Darrell Kearney, a spokesman for the county party told ABC News late Monday night that “based on conversations with Pataki staff there is a strong possibility Gov. Pataki will get in the race, and the announcement may come Saturday.” 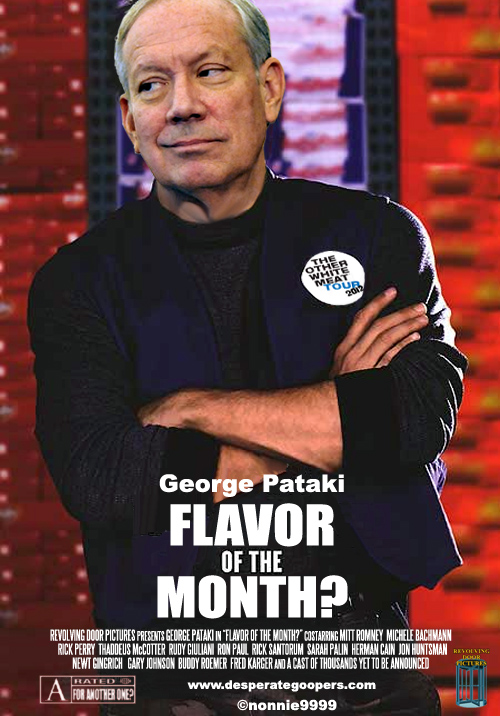