Rub-A-Dub-Dub, Two Schlubs in a Tub

[Grover] Norquist holds no elected office but is one of the most powerful figures in Washington, head of a lobbying and activist group Americans for Tax Reform. Democrats blame him for the impasse over deficit reduction.

The Democratic senator and former presidential candidate John Kerry described him as the “13th member” of the 12-member congressional super-committee given the task of drawing up a plan to reduce the country’s $15tn national deficit.

Kerry and other Democrats complained that Norquist’s name was repeatedly invoked by the Republicans, and the word “pledge” came up over and over again.

END_OF_DOCUMENT_TOKEN_TO_BE_REPLACED

Sen. Pat Toomey voted against the debt-limit compromise last week, partly because he didn’t think the budget-balancing recommendations of the bipartisan committee it created would stick.

A week later, Toomey finds himself serving on the committee he voted against.

The Pennsylvanian was one of six Republican members appointed Wednesday to Congress’ new 12-member “supercommittee.”

END_OF_DOCUMENT_TOKEN_TO_BE_REPLACED

[Supreme Court Justice Clarence Thomas and Dallas real estate magnate and a major contributor to conservative causes, Harlan Crow] met in the mid-1990s, a few years after Justice Thomas joined the court. Since then, Mr. Crow has done many favors for the justice and his wife, Virginia, helping finance a Savannah library project dedicated to Justice Thomas, presenting him with a Bible that belonged to Frederick Douglass and reportedly providing $500,000 for Ms. Thomas to start a Tea Party-related group. They have also spent time together at gatherings of prominent Republicans and businesspeople at Mr. Crow’s Adirondacks estate and his camp in East Texas. In several instances, news reports of Mr. Crow’s largess provoked controversy and questions, adding fuel to a rising debate about Supreme Court ethics.

END_OF_DOCUMENT_TOKEN_TO_BE_REPLACED

One of the fiercest races in next month’s midterm elections has turned ugly, with the Nevada senator Harry Reid accusing his Republican challenger, Sharron Angle, of encouraging a TV advert that tries to persuade Hispanics not to vote.

The Spanish-language ad was pulled from TV stations yesterday following an outcry. It said: “Don’t vote this November. This is the only way to send them a clear message – you can no longer take us for granted.”

Angle’s camp denied any connection to the ad, saying she encouraged as many Nevadans as possible to vote. The ad was placed by Robert de Posoda, president of Latinos for Reform.

END_OF_DOCUMENT_TOKEN_TO_BE_REPLACED

WASHINGTON — Senate Republicans, including Scott Brown of Massachusetts, said yesterday they are opposed to an extension of tax cuts for middle-income families unless cuts also are extended for the wealthiest Americans, setting up a defining showdown with President Obama in the run-up to November’s midterm elections.

The Senate signaled its determination after the Republican leader in the House, Representative John A. Boehner of Ohio, stunned Washington on Sunday by saying he was ready to compromise as a last resort and back Obama’s plan to extend cuts for middle-income families while letting those for the highest wage earners expire.

Senate minority leader Mitch McConnell dug in with an all-or-nothing approach and his spokesman said he had enough votes to block anything that falls short of a continuation of cuts for taxpayers in every bracket.

From IMBd (The Jerk):

Navin R. Johnson: Huh? I am not a bum. I’m a jerk. I once had wealth, power, and the love of a beautiful woman. Now I only have two things: my friends and… uh… my thermos. Huh? My story? Okay. It was never easy for me. I was born a poor black child. I remember the days, sittin’ on the porch with my family, singin’ and dancin’ down in Mississippi.

Rod Blagojevich:I’m blacker than Barack Obama. I shined shoes. I grew up in a five-room apartment. My father had a little laundromat in a black community not far from where we lived, I saw it all growing up.

I kid you not. 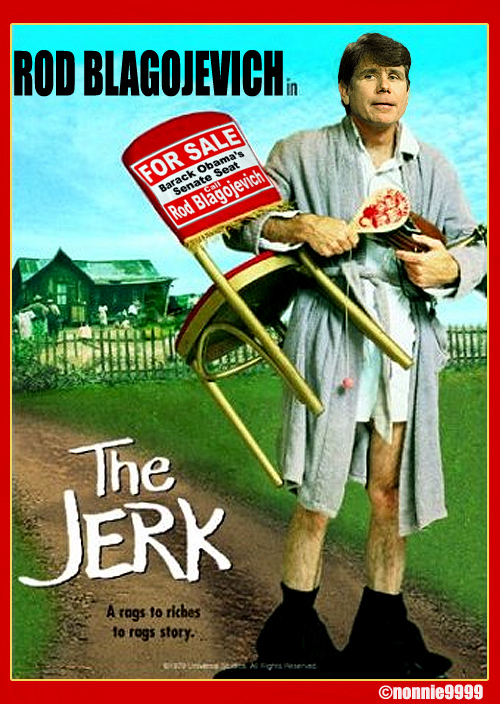 OMG! They Killed Sanity!! You Bastards!

CHARLESTON, S.C. — When Senator Lindsey Graham joined forces last month with Senator John Kerry on a compromise to the climate change legislation known as cap and trade, it was the last straw for the Charleston County Republican Party.

The county party, which has traditionally been considered moderate, voted by a wide margin to censure Mr. Graham in harsh terms.

Their grievance list was long: it cited the senator for calling opponents of immigration law change “bigots,” holding the Republican Party “hostage” by participating in bipartisan maneuvers, voting for the Wall Street bailout and tarnishing the ideals of freedom.

Sen. John McCain (R-AZ) has been booked for yet another Sunday talk show appearance this weekend — this time on CBS’ Face The Nation. Despite a “wildly unsuccessful presidential campaign” last year and his comparative irrelevancy in the U.S. Senate, this will mark the 15th time McCain has appeared on a Sunday talk show since January.