Do You Have Those in a Size Stupid?

BAGHDAD, Iraq (CNN) — A man identified as an Iraqi journalist threw shoes at — but missed — President Bush during a news conference Sunday evening in Baghdad, where Bush was making a farewell visit.

Bush ducked, and the shoes, flung one at a time, sailed past his head during the news conference with Prime Minister Nuri al-Maliki in his palace in the heavily fortified Green Zone.

Hey, kids! Have you seen the new Captain Underpants campaign poster? Go on over to Democratic Underground and take a look. Go ahead, I’ll wait. Didja see it? Captain Underpants all ethereal and majestic looking (not to mention about 30 years younger! 😆 ). Well, I unearthed the poster before it was totally airbrushed…

From the Philadelphia Daily News:

EVERY MORNING now, John McCain gets out of bed on the wrong side of history. No wonder he’s in a foul mood.

END_OF_DOCUMENT_TOKEN_TO_BE_REPLACED

From the Baltimore Sun:
WASHINGTON – President Bush and Iraq’s prime minister have agreed to set a “general time horizon” for bringing more U.S. troops home from the war, a dramatic shift from the administration’s ironclad unwillingness to talk about any kind of deadline or timetable.

The announcement yesterday put Bush in the position of offering to talk with Iraqi leaders about a politically charged issue that he has adamantly refused to discuss with the Democratic-led Congress at home. It could also complicate the presidential campaign arguments of Republican John McCain and Democrat Barack Obama, who have staked out starkly opposing stands on the unpopular war.

Blackwater guards shot and killed 17 people, including women and children, last September, prompting an outcry and protest from Iraqi officials.

WASHINGTON — President Bush strongly defended Iraq’s prime minister on Friday at what he called a “defining moment” for the Baghdad government, saying the United States supported its offensive against a Shiite militia and would provide any military assistance that was sought.

Mr. Bush, appearing in the East Room of the White House, said that he had not spoken to Iraq’s leader, Prime Minister Nuri Kamal al-Maliki, since Iraqi forces launched a major military operation to seize Basra from the control of militias, but spoke strongly in favor of the move, which he called the Maliki government’s initiative.

BAGHDAD (Reuters) – The Iraqi government wants security firm Blackwater to pay $8 million in compensation to each of the families of 17 people killed in a shooting, a senior government source said on Tuesday. 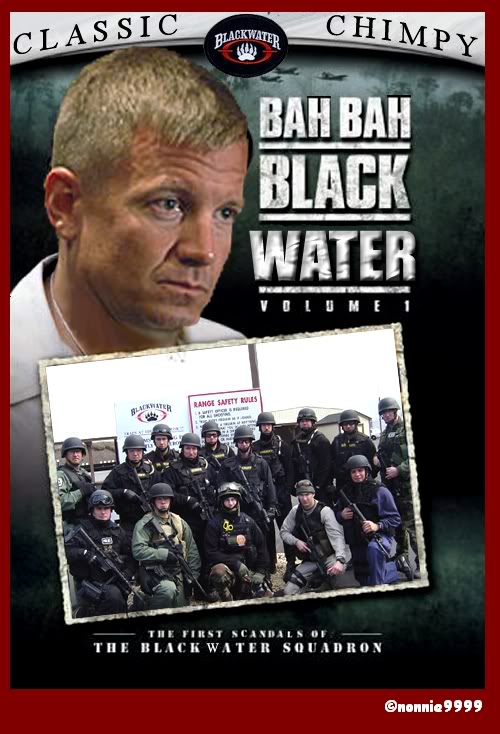 Well, if you ask Army General David Petraeus, the answer is Admiral William Fallon. However, when it comes to strategery, it seems that Fallon‘s advice will fall on deaf ears (Fallon, fall-on, get it? 😆 Oh, how i crack myself up!)
From Times Online:

On the eve of a crucial verdict on progress in Iraq being delivered to Congress, President Bush faced claims yesterday that deep divisions had opened up between his Middle East military commanders over whether his “surge” strategy was working.

Reports suggested that Admiral William Fallon, chief of US Central Command in the region, had pressed for a significant withdrawal of troops so that there would be sufficient forces for other pressing challenges.

BAGHDAD – Iraqi Prime Minister Nouri al-Maliki yesterday lashed out at U.S. and French politicians who have called on him to step down and accused U.S. forces of committing “big mistakes” in killing and detaining civilians in the hunt for insurgents.

It was the second outburst from the embattled leader in recent days as he has come under fire from an array of allies and adversaries who accuse him of failing to unite his cabinet and put key laws and programs in place.