A lot of people were alarmed Monday — with good reason — to learn that the House Republicans were relying on radio entertainer Rush Limbaugh and vile blogger Erick Erickson to tell them what to do about this whole debt ceiling thing. As everyone in Washington went into separate rooms to write their own horrible debt ceiling plans […], Erickson reported that he’s been taking “call after call” from unnamed “members of the United States Congress,” all of whom were seeking his approval, because this dumb, disingenuous hack is who the Republican Party is actually accountable to.

Meanwhile, John Boehner, the speaker of the House, gave his five-step “two-step” plan to famous shouty radio guy Rush Limbaugh, before he showed it to his own conference. (Of course, his conference is full of morons and extremists, many of whom wouldn’t have known what to think about Boehner’s plan until Uncle Rush explained it, so this was more shrewd than disrespectful.) 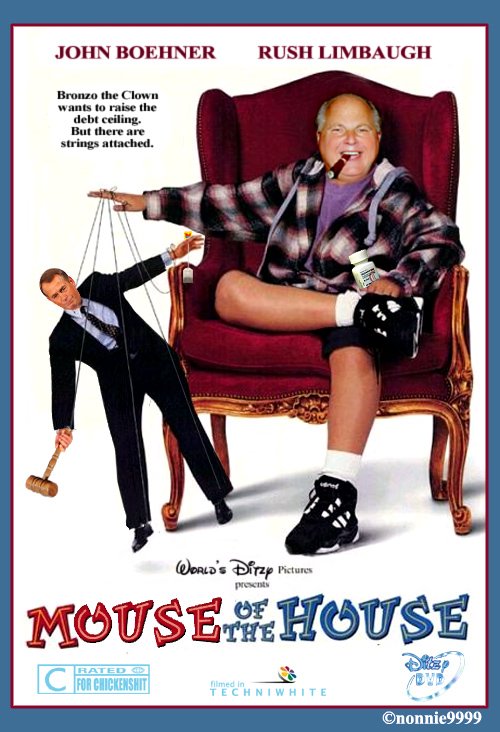 END_OF_DOCUMENT_TOKEN_TO_BE_REPLACED

Newt Gingrich has been trying to demonstrate an effort to rebuild his campaign, and one way was by getting his first finance co-chair in Iowa since the mass staff exodus of a few weeks ago.

Aides to Gingrich said he asked Greg Ganske, a former congressman who served in the House during Gingrich’s tenure as Speaker, to serve in the position during a tea party event in Indianola.

Ganske has been out of Congress for several years, but Gingrich has made clear he plans to try to make a renewed effort in the Hawkeye State, spending a string of days there this month and next in the lead-up to the Ames Straw Poll.

END_OF_DOCUMENT_TOKEN_TO_BE_REPLACED

He Wants to Have His Candy and Eat It, Too

Former Arkansas Gov. Mike Huckabee, who said last month that he had reached the decision not to enter the 2012 race after intense prayer, says that doesn’t take him out of the veepstakes.

“Everything is still open. I haven’t closed doors. I found long ago that that’s not the smart thing to do,” Huckabee told reporters in Little Rock, after a speech at the Clinton Presidential Library.

Huckabee opted against a run for the GOP presidential nomination in mid-May, telling viewers of his Fox News show “My heart says no.”

From the Detroit Free Press:

Really? After billions of years, the end of the world has to land on a Saturday?

On a weekend in late spring, no less.

But math is what it is. Harold Camping’s math, anyway. The 89-year-old, deep-voiced Christian radio broadcaster based in California has used the wealth of his network to frantically spread the word that an earthquake “so powerful it will throw open all graves” will hit at 6 p.m. Pacific time (9 p.m. Detroit time) today.

Why is Beck selling this fear? Because he  doesn’t want to deal with the problem at hand. It’s too tricky for him, as it is for most of us. So what are Beck and the troublemakers doing? They’re scaring people into a frenzy over the coming of a global caliphate. And to what effect? To fight for Mubarak? To place blame if we don’t? To encourage Mubarak to fight the people in the streets? No. I’ll bet Its to begin a long campaign of fear, something to talk about on the radio, something to scare people with.

END_OF_DOCUMENT_TOKEN_TO_BE_REPLACED

[Tuesday,] Yesterday, hate radio hosts Glenn Beck and Sean Hannity had their nationally syndicated radio shows dropped from WPHT in Philadelphia, which is the second radio station to drop both of the conservative commentators.

Just weeks ago, Beck was dropped from WOR in New York, but the most recent cancellation in Philadelphia hurts Beck even more. Beck got his start in Philadelphia, and many of his radio staffers still live in Philly, including Beck’s side-kick Stu. Immediately after being dropped yesterday, Beck dropped all affection for the city where he got his start, saying, “Philly sucks”[…]