Let them eat anything but specifically designed gay cakes 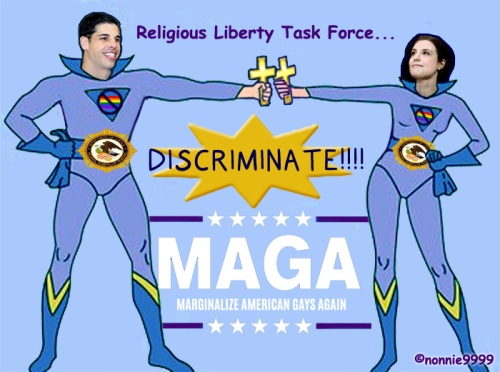 END_OF_DOCUMENT_TOKEN_TO_BE_REPLACED

His Shitstain is on Every Can!

From CHARLES P. PIERCE at Esquire:

On Tuesday night, the voters in the great state of Alabama pushed a lawless theocratic lunatic named Roy Moore one tiny step away from a seat in the United States Senate. Moore lost his job as chief justice of that state’s supreme court twice; on both occasions, he lost it by flaunting the authority of the federal court system as though he were Orval Faubus in 1957.

END_OF_DOCUMENT_TOKEN_TO_BE_REPLACED

Rep. Mo Brooks said if he was Senate Majority Leader Mitch McConnell, he would resign in the wake of the latest failure of the GOP health bill.

Brooks, R-Ala. said McConnell was “responsible” for the bill’s failure and that he was putting the GOP’s policy plans in jeopardy.

END_OF_DOCUMENT_TOKEN_TO_BE_REPLACED

Last September, at a rally in Roanoke, Virginia, then-presidential candidate Donald Trump made a promise to black America. “I will fight to make sure every single African-American child in this country is fully included in the American dream,” he said. “That includes the new civil rights issue of our time: school choice.” This has been a familiar refrain for Trump. “At rallies last year across the country,” The New York Times reported in March, “Trump said over and over again that he would use the nation’s schools to fix what he described as failing inner cities and a virtual education crisis that most hurts black and Hispanic children. In North Carolina, he called school choice ‘the great civil rights issue of our time.’ In Florida, he declared that ‘every disadvantaged child in this country’ should have access to school choice.”

“School choice” is conservative-speak for charter schools and vouchers, both of which represent a different degree of privatization in education. Vouchers use taxpayer dollars to fund attendance at private and religious schools, while charters are publicly funded but, in many cases, privately controlled. Trump’s education policy advocates for both, and in his controversial appointment of Betsy DeVos as education secretary, he elevated a longtime champion of the cause.

END_OF_DOCUMENT_TOKEN_TO_BE_REPLACED

In just her first year in office, Rep. Vicky Hartzler (R-MO) has proven to be one of the most socially conservative members of Congress, and today she demonstrated just how intolerant she is of people who do not share her beliefs. In an interview, she and the Family Research Council’s Tony Perkins were condemning the Air Force Academy for creating an outdoor worship space that accommodates “Earth-based” religions. Hartzler said she believes that her rabidly conservative brand of Christianity is “the main religion in our country” and condemned any attempt to accommodate “fringe religions”:

END_OF_DOCUMENT_TOKEN_TO_BE_REPLACED

When does he get lost in the desert for 40 years?

ATLANTA, Ga. – Herman Cain, whose campaign could use some redemption in the wake of a sexual harassment scandal, told a crowd of young Republicans on Saturday that God convinced him to run for president and that he “prayed and prayed and prayed” about it.

The Republican contender made no mention of the allegations from former subordinates at the National Restaurant Association.

Maybe he just can’t spell, and he meant preyed and preyed.

“I prayed and prayed and prayed. I’m a man of faith, I had to do a lot of praying for this one, more praying than I’d ever done before in my life. And when I finally realized that it was God saying that this is what I needed to do, I was like Moses. ‘You’ve got the wrong man, Lord. Are you sure?’” Cain told a crowd of over 100 people at the Young Republican National Federation, an event hosted by the Georgia Young Republicans at the Westin Peachtree Plaza.

END_OF_DOCUMENT_TOKEN_TO_BE_REPLACED

Hey, kids, I was out spending a lot of money on new appliances, and I wasn’t able to do a new poster.  However, I read this at AMERICA blog by John Aravosis:

That reminded me of an old quote of Mittsie’s from back in 2007:

Freedom requires religion, just as religion requires freedom. Freedom opens the windows of the soul so that man can discover his most profound beliefs and commune with God. Freedom and religion endure together, or perish alone.

I’m confused.  Is bigotry is bad, but only when it’s aimed at Mormon’s?