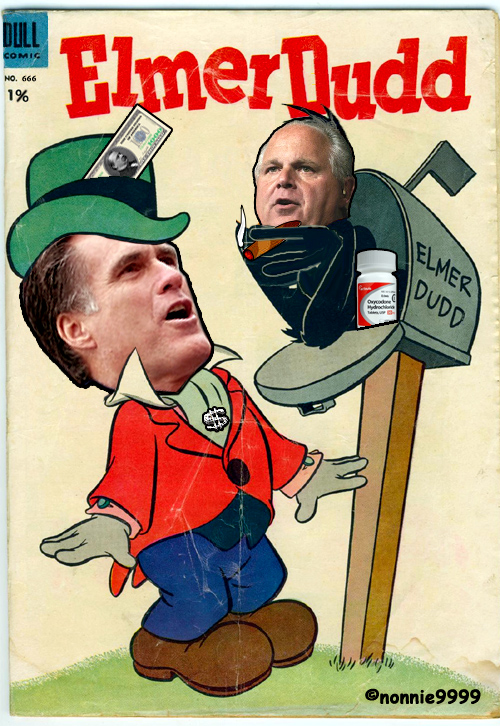 END_OF_DOCUMENT_TOKEN_TO_BE_REPLACED

For His Next Musical Number: Amazing Disgrace

Conservatives are not rushing to defend businessman Herman Cain in the wake of a press conference in which Sharon Bialek — with celebrity lawyer Gloria Allred at her side — claimed that the former Godfather’s Pizza CEO made an unwanted, physical sexual advance on her in 1997.

Many are pointing out that there are numerous verifiable details in Bialek’s story and are reserving judgment until more reporting comes out. Few seem willing to dismiss her story completely.

A few did dismiss the accusations out of hand. “She’s lying,” said Adam Baldwin, an actor and frequent contributor to Andrew Breitbart’s Big Journalism site. “Not a credible performance.”

Numerous conservatives commented on Bialek’s hair and makeup, and the fact that she had hired Allred, a Democratic donor. Rush Limbaugh mocked her as a “blonde bombshell” with a funny name.

END_OF_DOCUMENT_TOKEN_TO_BE_REPLACED

Either we ask the wealthiest Americans to pay their fair share in taxes, or we’re going to have to ask seniors to pay more for Medicare. Either we gut education and medical research, or we’ve got to reform the tax code so that the most profitable corporations have to give up tax loopholes that other companies don’t get. We can’t afford to do both. This is not class warfare. It’s math.

A lot of people were alarmed Monday — with good reason — to learn that the House Republicans were relying on radio entertainer Rush Limbaugh and vile blogger Erick Erickson to tell them what to do about this whole debt ceiling thing. As everyone in Washington went into separate rooms to write their own horrible debt ceiling plans […], Erickson reported that he’s been taking “call after call” from unnamed “members of the United States Congress,” all of whom were seeking his approval, because this dumb, disingenuous hack is who the Republican Party is actually accountable to.

Meanwhile, John Boehner, the speaker of the House, gave his five-step “two-step” plan to famous shouty radio guy Rush Limbaugh, before he showed it to his own conference. (Of course, his conference is full of morons and extremists, many of whom wouldn’t have known what to think about Boehner’s plan until Uncle Rush explained it, so this was more shrewd than disrespectful.)

END_OF_DOCUMENT_TOKEN_TO_BE_REPLACED

Radical Engineering of an Apology

Gingrich, who announced his presidential candidacy just last week, has come under fire in recent days for a series of missteps that some top Republicans believe have crippled his campaign right out of the gate.

Washington (CNN) – Rep. Darrell Issa (R-California), the brand-new chairman of the House Committee on Oversight and Government reform, defended comments he had previously made that President Obama is “one of the most corrupt presidents of modern times.”

“I think people misunderstand the meaning of the word corrupt, and obviously, CNN does. ‘Corrupt’, or ‘corrupted’ or ‘failure’, it’s no different than a disc drive that’s given you some bits that are wrong,” Issa said on CNN.

We’ve focused on comic book and book covers, and today I thought we’d concentrate on the characters.  When I was little, I always read Blondie comics, and my favorite characters were Dagwood and his boss, Mr. Dithers.  I did a bit of a update during the Chimpy administration years.  Here’s Chimpy with his boss, Deadeye Dick Cheney (with an appearance at the end by Laura Pickles Bush and Barney).  Of course, Deadeye Dick never dithered…