(CNN)—Congressional Republicans gathered at the White House Wednesday afternoon to celebrate the passage of a major tax cut bill with President Trump. It was a love-fest. 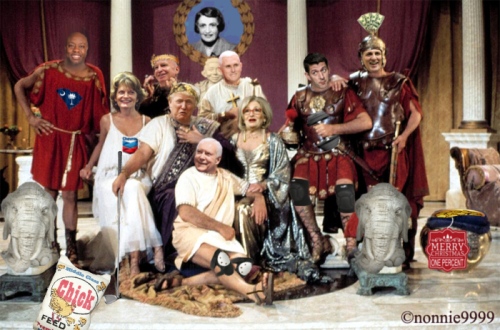 END_OF_DOCUMENT_TOKEN_TO_BE_REPLACED

How can we miss you if you won’t go away?

Hey, kids, didja read the news today? POLITICO is reporting that    Paul Ryan is   thinking about putting down his Speaker’s gavel and walking away from D.C. at the end of his term. If the tax cut bill that will enrich the uber-wealthy and destroy the middle class goes through, and he succeeds in decimating Medicare and Medicaid, then he will consider his job done. He wants to go home and  spend more time with his  family. But wait, there’s more!

END_OF_DOCUMENT_TOKEN_TO_BE_REPLACED

Republicans have wanted to repeal Obamacare for years — but they’ve wanted to overhaul Medicaid for far longer.

They are now getting their chance.

The health care legislation working its way through Congress would do much more than its stated purpose of repealing and replacing Obamacare. It would make the most far-reaching changes and deepest cuts to Medicaid in the program’s 52-year history.

“Medicaid: Sending it back to the states. Capping its growth rate. We’ve been dreaming of this since I’ve been around, since you and I were drinking at a keg,” House Speaker Paul Ryan said in March at an event hosted by the conservative National Review magazine.

END_OF_DOCUMENT_TOKEN_TO_BE_REPLACED

Hey, as long as we’ve got the bus, might as well throw a few million people under it!

In the hours leading up to the House vote on the American Health Care Act (AHCA), Republicans prepared for victory in their push to repeal and replace Obamacare.

(Don’t squint, kids, you’ll get wrinkles. Click on the image for a larger version)

END_OF_DOCUMENT_TOKEN_TO_BE_REPLACED

The Name of the Game is Blame

Who is to blame for the health care bill fiasco, and whose job might be in jeopardy? Not  Paul Ryan’s, according to Chris Krueger, strategist at Cowen and Company (WSJ):

Ryan is probably safe as speaker because nobody particularly wants to be Henry VIII’s next wife. 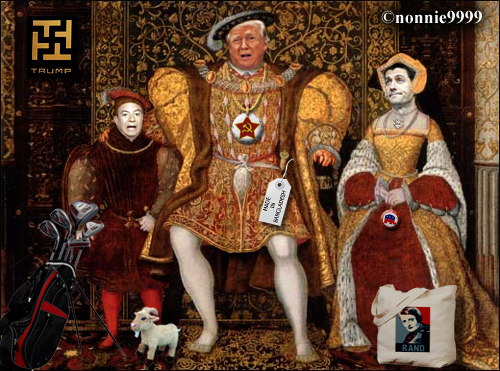 END_OF_DOCUMENT_TOKEN_TO_BE_REPLACED

Mittsie’s campaign was wilting on the vine, and they decided to wake things up with a bold choice to liven things up.

END_OF_DOCUMENT_TOKEN_TO_BE_REPLACED

At CNN’s Tea Party-indulging debate on Monday, Ron Paul, a medical doctor, faced a pointed line of questioning from Wolf Blitzer regarding the case of an uninsured young man who suddenly found himself in dire need of intensive health care.

Should the state pay his bills? Paul responded, “That’s what freedom is all about: taking your own risks. This whole idea that you have to take care of everybody—”

He never quite finished that point, letting the audience’s loud applause finish it for him. So Blitzer pressed on, asking if he meant that “society should just let him die,” which earned a chilling round of approving hoots from the crowd. Paul would not concede that much outright, instead responding with a personal anecdote, the upshot being that in such a case, it was up to churches to care for the dying young man.