From Chris Moody at THE TICKET at YAHOO!:

NAPLES, Fla. — The staff at Books-a-Million didn’t know what hit them.

In preparation for a Saturday morning book signing with Newt Gingrich, the bookstore printed numbered cards for the first 500 people looking for an autograph from the former House speaker and Republican presidential candidate. The store gave out its first card at 8 a.m. on Black Friday–27 hours before Gingrich was scheduled to arrive–and ran out before he stepped in the door. After that, the Gingrich fans had to fend for themselves.

Gingrich spent the two days after Thanksgiving on a campaign swing through Naples, Florida, a wealthy conservative stronghold in the Sunshine State that was, to say the least, extremely welcoming.

After his speech, during which he took time to clarify his position on illegal immigration, Gingrich hopped over to a $1,000-per-person fundraiser at a city council member’s home and then spent four hours the next morning at a Books-a-Million, where he brought in 650 people.

After months in the middle tier, Gingrich is the latest presidential candidate not named Mitt to ascend to the top of national polls. And with just five weeks until the first caucus in Iowa, he may have the best chance at being there when it matters. On Sunday, the largest newspaper in New Hampshire, the Union Leader, endorsed Gingrich in the Republican primary.

Although he has been in the public eye for years and seen his share of crowds, this kind of attention is new for Presidential Candidate Newt.

END_OF_DOCUMENT_TOKEN_TO_BE_REPLACED

An Earmark By Any Other Name Would Smell as Expensive

Speaker John Boehner (R-OH) likes to tout his opposition to earmarks. Indeed, since first entering Congress in 1991, the congressman has never requested a single earmark. And one of his caucus’s first moves in the new Congress has been to renew a voluntary earmark ban in the House of Representatives, making good on a major campaign promise. Yet as CAP [Center for American Progress] Senior Fellow Scott Lilly reveals in a new analysis, “No, He Wouldn’t—Would He?,” Boehner and House Republicans appear to have included an earmark-in-all-but-name for the new Speaker’s district in the newly released House Appropriations Continuing Resolution (CR).

WASHINGTON — Senate Republicans, including Scott Brown of Massachusetts, said yesterday they are opposed to an extension of tax cuts for middle-income families unless cuts also are extended for the wealthiest Americans, setting up a defining showdown with President Obama in the run-up to November’s midterm elections.

The Senate signaled its determination after the Republican leader in the House, Representative John A. Boehner of Ohio, stunned Washington on Sunday by saying he was ready to compromise as a last resort and back Obama’s plan to extend cuts for middle-income families while letting those for the highest wage earners expire.

Senate minority leader Mitch McConnell dug in with an all-or-nothing approach and his spokesman said he had enough votes to block anything that falls short of a continuation of cuts for taxpayers in every bracket. 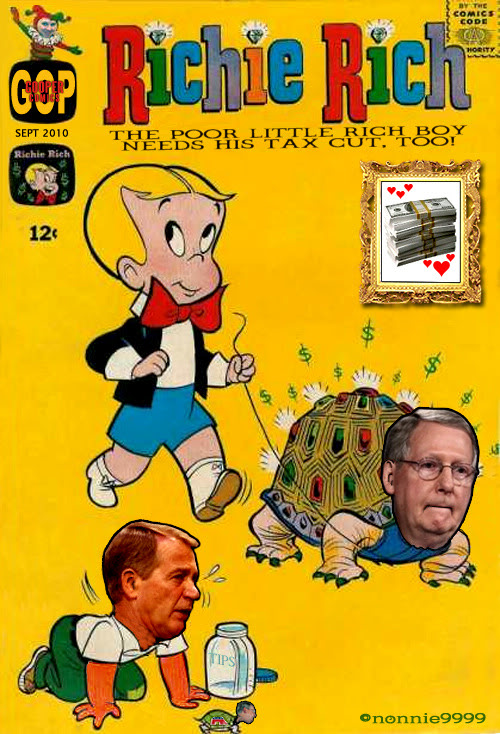 Rep. Andre Carson (D-Ind.) said Saturday that healthcare protesters at the Capitol directed racial epithets at him and Rep. John Lewis (D-Ga.) as they walked outside.

Carson, a member of the Congressional Black Caucus along with Lewis, told The Hill that protesters called the lawmakers the N-word.

Tea Party protesters held a rally outside the Capitol on Saturday, which included speeches by Rep. Michele Bachmann (R-Minn.) and actor Jon Voight, and then proceeded into the halls to lobby members at the 11th hour.

Lewis was one of the leaders of the civil rights movement alongside Martin Luther King. Jr.

Asked if racial epithets were yelled at him, Lewis responded, “Yes, but it’s OK. I’ve heard this before in the ’60s. A lot of this is just downright hate.”

Keep On Truckin’ (But Don’t Break a Nail)

Nothing’s changed for Scott Brown when he drives to work, even though it’s now in the shadow of the U.S. Capitol. The newly elected Massachusetts Republican senator still drives his 2005 green GMC Canyon pickup truck to the job.

Aides say that Brown has no plans to trade the truck in for a more senatorial ride. What’s more, when he travels around town to events, he shoves his aides into the cluttered back seat of the mid-size truck.

Wow! How macho can one fella be?

The former Alaska governor and one-time vice presidential candidate [Sarah Palin] has been traveling the country in recent weeks, promoting her book and disparaging Democrats, the Washington establishment and the media elite. Huge crowds greet her wherever the bus entourage takes her.

Well, Saturday night, if all goes to plan, Ms. Palin’s book tour will take her someplace else: the Gridiron Club’s winter dinner in Washington. For those who don’t know, the Gridiron dinners are among the most exclusive of Washington events where the city’s media elite — to borrow a phrase — share dinner, drinks and bonhomie with elected officials, political leaders and other members of the governing elite.

Ms. Palin, the Republican vice presidential candidate under Senator John McCain of Arizona last year, is one of two guests speakers, who in years past were invited to provide typically humorous speeches. The other speaker this year is Representative Barney Frank, the liberal Democrat from Massachusetts.

Oh, to be a fly on one of those walls!

Virginia should be reeling

At age 34, two years before his first election and two decades before he would run for governor of Virginia, Robert F. McDonnell submitted a master’s thesis to the evangelical school he was attending in Virginia Beach in which he described working women and feminists as “detrimental” to the family. He said government policy should favor married couples over “cohabitators, homosexuals or fornicators.” He described as “illogical” a 1972 Supreme Court decision legalizing the use of contraception by unmarried couples.

Hey kids! Have you heard? The Rethugs have a strategery! Nope, I’m not kidding! Don’t believe me? Well, maybe you’ll believe the guys at Politico:

Peril awaits any first-term lawmaker who ventures to the House floor unprepared for a duel, but Ohio Democrat Mary Jo Kilroy had a particularly rough go of it the other day.

Kilroy took the floor to support an amendment to a popular public-service bill — only to face an ambush from Rep. Virginia Foxx (R-N.C.), who hit her hard for her vote on an unrelated American International Group measure.

It wasn’t an accident.

Foxx is part of a team of Republican members that House Minority Whip Eric Cantor (R-Va.) has put together to create embarrassing, YouTube-worthy moments for vulnerable Democratic freshmen.