The Megillah in Wasilla

While Rethuglican TV pundits try to make Palinade out of the lemons Princess Sarah threw them by resigning the governorship of Alaska, there were others who were most likely celebrating. Yeah, I’m talking about the 2012 presidential hopefuls. Good thing they still have the backroom at Denny’s they were partying in when John Ensign and Sparky Marky Mark Sanford put their political ambitions to bed right after they did the same to their mistresses .

(Reuters) – Alaska Governor Sarah Palin said on Friday she will resign this month and will not run for re-election as governor amid speculation that she will seek the Republican party’s nomination for president in 2012.

Following is a list of Republicans seen as potential candidates for their party’s nomination in 2012.

The tea bag protests that marked tax day on Wednesday represented an opportunity and a risk for the Republican Party. Opportunity because they offered a jolt of energy for a battered party after two dismal elections. Risk because they supplied at best only a partial answer to what ails the GOP. Fueling anger is not a strategy.

Rush wasted no time telling us that he was congratulating Obama for his “cool hand” in enacting the daring rescue of Captain Richard Phillips from the Somali pirates. Being more snide and sarcastic than even we thought possible, Rush pointed to an ABC News report that a White House official told George Stephanopoulos that the whole ordeal “would make a great movie,” announcing that he had a preliminary idea for what that movie would look like. Going off his working title “President Obama Turns on Somali Counterparts,” Rush says “President Obama rose to the occasion and saw to it that the Somali merchant marine organizers would not get away with the same tactics that the domestic American organizers get away with.”

Rush then ran through the casting list for his movie — Will Smith as President Obama and as the SEAL team captain. The pirates will be played by Sarah Palin, Eric Cantor, Mitt Romney, Bobby Jindal, Mike Pence, and Rush himself, and in their lifeboat will be a whole bunch of tea. Get it? Like the tea parties! We hope he can write in Glenn Beck somehow. Anyway, there’s also “Deep Parrot” in the movie, a White House official leaking everything to the media so they’ll credit Obama in their reports.

Bobby Jindal has a wunderkind resume: a Rhodes Scholar appointed assistant secretary of Health and Human Services at age 29, elected to the U.S. House at 33 and governor of Louisiana at 36.

Increasingly, though, he’s being likened to Kenneth, the dweeby page on “30 Rock.”

And now, for something completely different.

For a man who expresses no desire to lead the Republican Party, Rush Limbaugh has a knack for creating problems for those who do.

The ongoing controversy over Limbaugh’s statement in a speech to the Conservative Political Action Conference on Saturday that he wants “Barack Obama to fail” and the aggressive Democratic pushback it drew has emerged as the latest challenge for a party struggling to find its voice and lacking an obvious national leader.

END_OF_DOCUMENT_TOKEN_TO_BE_REPLACED

CPAC? I need some Ipecac!

Limbaugh exhorted conservatives to stay upbeat, blasted the alleged socialist agenda of the “Democrat Party,” and called out the new president, the one he hopes will fail.

But strip away the platitudes and cheap applause lines about freedom, self-reliance and the virtues of capitalism, and you’re left with the subject that really interests Rush Limbaugh: himself. The conservative talker with the self-professed “talent on loan from God” spoke incessantly in the first person: there were more “I’s” in his CPAC address than in an Idaho potato field. One clear message emerged from the speech: 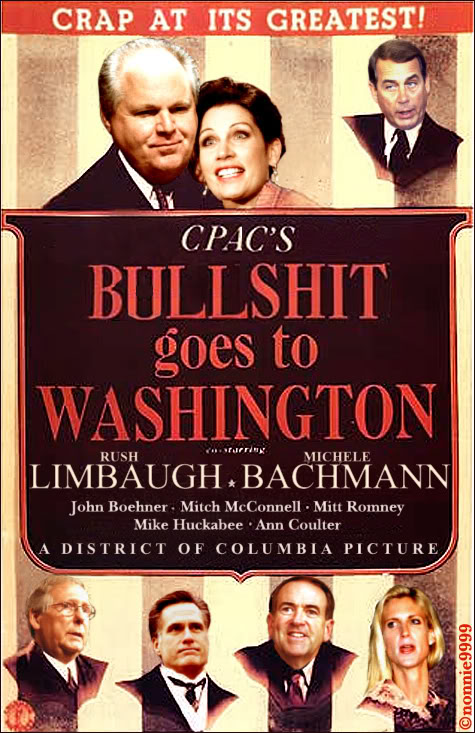 Volcanoes Aren’t the Only Things Erupting!

In his official Republican response to President Barack Obama’s speech to the nation Tuesday, Louisiana Gov. Bobby Jindal said repeatedly that “Americans can do anything!”

With one exception, apparently. We don’t need to keep an eye on simmering volcanoes.

Jindal singled out “volcano monitoring” as an unnecessary frill that Democrats stuck in the recently adopted stimulus package.

“Their legislation is larded with wasteful spending,” Jindal said. “It includes … $140 million for something called ‘volcano monitoring.’ Instead of monitoring volcanoes, what Congress should be monitoring is the eruption of spending in Washington, D.C.”