Sarah Palin’s bus tour has not been cancelled, if you haven’t heard. It’s on hiatus. Ex-Gov. Palin took to social media yesterday to complain that news reports [from her employer, Fox News!!  😆  ]about the end of her One Nation motorized vacation were in error.

She said on her Facebook page that the coming weeks are busy for her due to civic responsibilities – she’s been called for jury duty.

And if you believe that the real reason, she’s got a bridge to nowhere to sell you.

Food for Thought: Have a Drink Edition 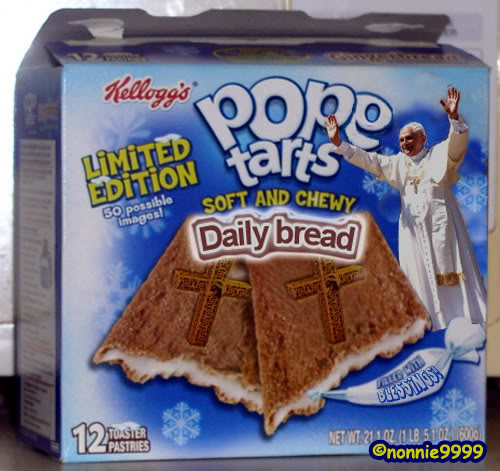 We covered lots of food here lately, but we need something to wash all that stuff down.  If you don’t want to choke, you can count on prayer…

…but I suggest you have a drink.

END_OF_DOCUMENT_TOKEN_TO_BE_REPLACED

From the CHICAGO SUN-TIMES:

Things keep getting interesting behind the scenes on ”Dancing With the Stars.” A show insider says, ”Move over, Michael Bolton! Bristol Palin is now out-diva-ing you!”

The source said the daughter of former Alaska Gov. Sarah Palin has become a constant pain in the rear for “DWTS” staffers. ”Clearly she didn’t read the fine print on her contract — and that’s just a figure of speech. There’s nothing hidden in the contracts,” said the ”Dancing” source.

”Otherwise, Bristol wouldn’t be complaining about all the things contestants are required to do.”

Bristol and Mike The Situation Sorrentino, like their predecessor on DWTS, Kate Gosselin (whose only achievement to date seems to be squeezing out 8 kids), are now considered stars. Captain Underpants is flirting with Snooki on Twitter. Combine that with the news now becoming nothing but entertainment and the race for ratings, would this be inconceivable in the near future?

Funny Princess Can’t Take a Joke, Because She Is One

From the Austin American-Statesman (February 17):

Sarah Palin is lashing out at the portrayal of a character with Down syndrome on the Fox animated comedy “Family Guy.”

In a Facebook posting headlined “Fox Hollywood — What a Disappointment,” the 2008 Republican vice presidential nominee and current Fox News contributor said Sunday night’s episode felt like “another kick in the gut.” Palin’s youngest son, Trig, has Down syndrome.

The episode features a character on a date with a girl [Ellen] with Down syndrome. He asks what her parents do. She replies: “My dad’s an accountant, and my mom is the former governor of Alaska.”

“If the writers of a particularly pathetic cartoon show thought they were being clever in mocking my brother and my family yesterday, they failed. All they proved is that they’re heartless jerks.”

Now for a little Levi-ty

If former Alaska Gov. Sarah Palin thought John McCain’s staffers stabbed her in the back when they tried to blame her for his loss last November, one can only imagine what she thinks these days about Levi Johnston, the father of her grandchild.

Johnston, who is weighing the many “celebrity” career options now coming his way thanks to the meteoric rise of his former mother-out-of-law, is in sharper-than-a serpent’s-tooth mode in the October issue of Vanity Fair, where he — how to put this delicately? — rips Palin a new one for what he perceives as her personal failings.

Payback is a Real Bitch, but so is Princess Sarah!

Levi Johnston, the former fiance of Gov. Sarah Palin’s daughter Bristol, on Thursday joined the crowd offering up potential reasons for Palin’s decision to step down.

Johnston met with reporters to say that he heard her musing about a better life, one in which she could spend more time at home, reduce her stress, and accept the lucrative offers coming her way.

The only thing she doesn’t quit is quitting!

From Michael Carey at the Los Angeles Times (Op-Ed):

Reporting from Anchorage — Sarah Palin’s career as governor of Alaska is over. So is her barely begun career as a serious presidential candidate. The road map to the White House doesn’t include a stop at “I quit.”

In a truly Palinesque moment near the end of her speech in Wasilla on Friday, the departing governor quoted a saying she said her parents kept on their refrigerator. “Don’t explain: Your friends don’t need it, and your enemies won’t believe you anyway.”

The governor might have done better to take her cue from another piece of refrigerator wisdom: “Quitters never win, and winners never quit.”