There was much excitement behind the scenes at the Rethuglican Convention! There was a lot of planning going on! 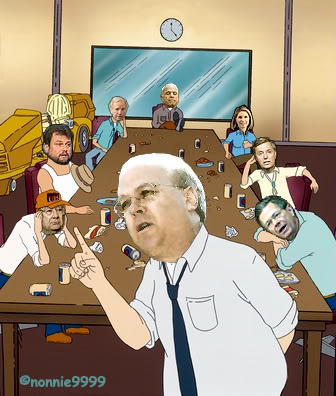 All of Captain Underpants’s lobbyists friends and advisers were there, including Karl Rove, Phil Gramm (who kept his hands over his ears, lest there be any whining! 😆 ), Randy Scheunemann, Joe McLieberman, Nicolle “the media sucks” Wallace, Lindsey-poo, and Charlie Black. Captain Underpants snoozes in the background until they wake him up to tell him what he honestly and truly thinks.
END_OF_DOCUMENT_TOKEN_TO_BE_REPLACED

Facing growing dissatisfaction both inside and outside his campaign, Sen. John McCain ordered a shake-up of his team yesterday, reducing the role of campaign manager Rick Davis and vesting political adviser Steve Schmidt with “full operational control” of his bid for the presidency.

Charles R. Black Jr., one of McCain’s most senior political advisers, said in an interview with Fortune magazine that a fresh terrorist attack “certainly would be a big advantage to him.” He also said that the December assassination of former Pakistani prime minister Benazir Bhutto, while “unfortunate,” helped McCain win the Republican primary by focusing attention on national security.

“His knowledge and ability to talk about it reemphasized that this is the guy who’s ready to be Commander-in-Chief. And it helped us,” Black told the magazine in its upcoming issue.

What’s with all the terror talk lately from the Rethugs? Newt Gingrich, John Bolton. and Rudy Noun Verb 9/11 Giuliani have all been flapping their lips and doing their best Chicken Little imitations. Who told them that these kind of scare tactics would work? Oh wait….now I remember….. 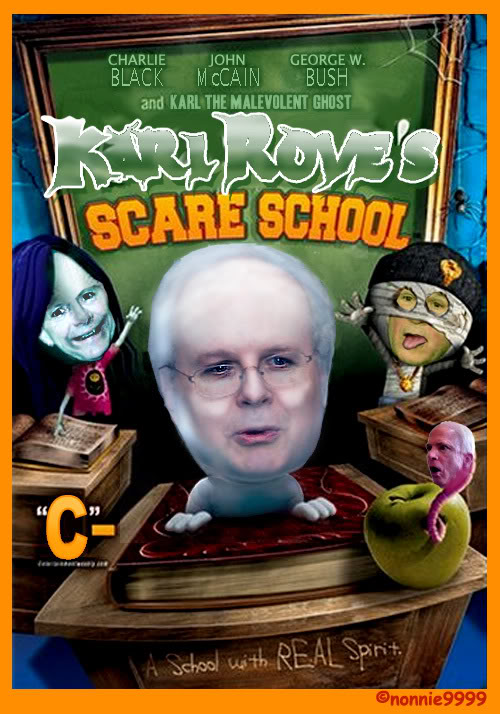 From Frank Rich at The New York Times:

THEY thought they were being so slick. When the McCain campaign abruptly moved last Tuesday’s fund-raiser with President Bush from the Phoenix Convention Center to a private home, it was the next best thing to sending the loathed lame duck into the witness protection program. John McCain and Mr. Bush were caught on camera together for a mere 26 seconds, and at 9 p.m. Eastern time, safely after the networks’ evening newscasts. The two men’s furtive encounter on the Phoenix airport tarmac, as captured by a shaky, inaudible long shot on FoxNews.com, could have been culled from a surveillance video.

But for the McCain campaign, any “Mission Accomplished” high-fives had to be put on hold. That same evening Politico.com broke the news of Scott McClellan’s memoir, and it was soon All Bush All the Time in the mediasphere. Or more to the point: All Iraq All the Time, for the deceitful origins of the war in Iraq are the major focus of the former press secretary’s tell-all.

May 27 (Bloomberg) — John McCain’s challenge in winning the presidency isn’t unique. George H.W. Bush in 1988 and Al Gore in 2000 also struggled to chisel an identity separate from a two- term incumbent president of their party.

There’s one big difference: in 1988, Ronald Reagan had a 51 percent approval rating, according to Gallup surveys, and in 2000 Bill Clinton’s was 57 percent. Today, President George W. Bush’s rating is 28 percent and the leading House Republican political analyst, Virginia Representative Tom Davis, said the president is “absolutely radioactive” for party candidates, including McCain, the presumptive presidential nominee.

So why is the Arizona senator going to appear with Bush in Phoenix tonight for a closed-door fundraiser? McCain, whose fundraising totals are dwarfed by those of Democratic candidate Barack Obama, needs Bush to bring in money and signal to conservative Republicans that he can be trusted.

I Smell Something Burning!

From the Arizona Republic:

McCain, the presumptive GOP presidential nominee, has invited 10 couples to his family’s rustic cabin near Sedona.

Black, chairman of BKSH & Associates, told The Hill his resignation would be effective Monday, March 31. He will join McCain’s campaign on a full-time basis starting Tuesday.