On Thursday night, Rep. Michele Bachmann (R-Minn.) told Fox News that she hasn’t “had a gaffe or something that I’ve done that has caused me to fall in the polls.”

The idea that Bachmann hasn’t made any gaffes in her roller-coaster campaign for the 2012 presidential nomination is far-fetched at best. But in a sense, Bachmann is right. Her fall had (almost) everything to do with Texas Gov. Rick Perry and (almost) nothing to do with her misstatements.

END_OF_DOCUMENT_TOKEN_TO_BE_REPLACED

At the beginning of the week, I read about the little spat that Botox Batshit Bachmann was having with her ex-campaign manager Ed Rollins. Ol’ Ed was a bit critical about her batshittery about the HPV vaccine causing mental retardation, and he remarked that she didn’t really have a snowball’s chance in Hell after the Iowa caucuses. Well, of course, Botox Batshit Bachmann was quite surprised. She would have looked like it, too, but with all the Botox, she is no longer able to raise her eyebrows. When asked about Ol’ Ed’s disloyalty to her and how he had previously dissed other candidates he had worked for, she said, “I guess I should have done that Google search.” She would have furrowed her forehead at that point, but, once again, the Botox. In response, Ol’ Ed said, “Well, if I would have Googled her, I would have found out she had 6 chiefs of staff in 5 years.”

Well, while they were busy regretting not googling each other, there are some new developments in the Botox Batshit Bachmann campaign ranks.

Boo-zing it up at the Rethuglican Debates

Forget the sound bites from the stage. Some of the most memorable moments from a series of Republican presidential debates have come not from the candidates competing for the nomination but from the intensely partisan audiences there to appraise them.

In four of the most recent debates, assertive audience members have managed to make their mark on the proceedings.

END_OF_DOCUMENT_TOKEN_TO_BE_REPLACED

Michele Bachmann is ambling through the aisles of a cramped meat locker in an industrial section of Des Moines. Massive sides of beef, weighing up to 950 lbs., hang from hooks near the ceiling and droplets of blood pool on the frigid floor. You can see your breath. Bundled in a blue coat, a string of pearls around her neck glittering in the low light, Bachmann trades small talk and gamely slices slabs of rib eye in the cutting room. “My grandfather owned a meat market in Iowa,” she tells the manager of the family-owned meatpacking plant, which has operated since 1869 and employs six workers. It is a perfectly scripted set piece for Bachmann, whose two-day swing through the Hawkeye State this week is designed to accentuate her blue-collar, Midwestern bona fides, her connection to Iowans and her commitment to the retail politicking it takes to win the state’s first-in-the-nation caucus this winter. When you want to win Iowa, this is the type of place you spend a drizzly Tuesday morning.

END_OF_DOCUMENT_TOKEN_TO_BE_REPLACED

Snow White? Not even before she drifted.

Days after Rep. Michele Bachmann (R-Minn.) snagged Ed Rollins as manager of her nascent presidential campaign, the high-profile strategist is engaged in a war of words with advisers to former Alaska governor Sarah Palin.

Palin and Bachmann are potential rivals in the 2012 GOP presidential primary contest.

Mirror, mirror, on the wall, who dares to call Princess Sarah the dumbest of them all? 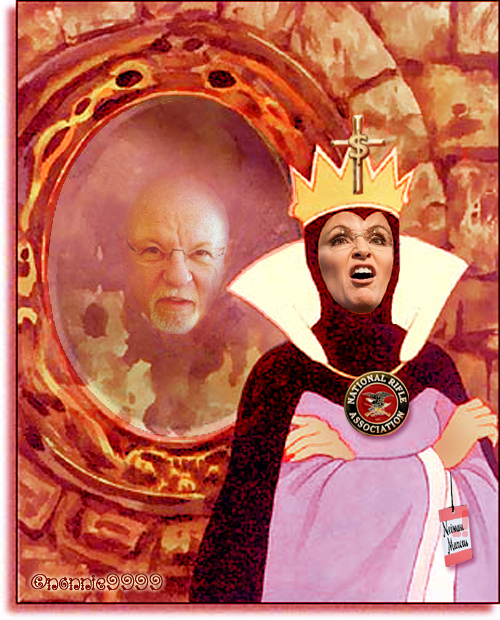 Lipstick on a Pygmalion

(CNN) – The campaign veteran who has signed up to run Rep. Michele Bachmann’s expected bid for the Republican presidential nomination says the congresswoman from Minnesota would be a formidable candidate in the Iowa caucuses.

This Steele is Anything But Stainless

Michael Steele’s term as Republican National Committee Chairman has been riddled with controversial verbal missteps that have roused the scorn of his Republican colleagues. His most recent gaffe in mischaracterizing the Afghanistan war prompted an outcry among prominent Republicans who called for his ouster. Remarking on the appearance of “Shadow RNC” Chairman Ed Gillespie over Steele as the RNC mouthpiece, Face the Nation’s Bob Schieffer asked GOP strategist Ed Rollins today whether the GOP should “do something” about Steele. Rollins doubled-down on his dismissal of Steele’s efficacy, calling him a “disaster” who has “failed miserably” in his mission:

From The Washington Independent:

John McCain, the 2008 Republican Party nominee for president, was not invited to speak at this past weekend’s Conservative Political Action Conference. Neither was former President George W. Bush, and neither was former Vice President Dick Cheney.

“Our big effort this year was not to look back, but to look forward,” said David Keene, the chairman of American Conservative Union, a CPAC sponsor, on Saturday.

The 36th annual meeting of the conservative movement — the largest ever, with more than 8,500 attendees, as organizers delighted in pointing out — was marked by its rejection of the past decade of conservative government.