Wisconsin Governor Scott Walker has sparked mass protests in the state this week with a proposal to cut state employee benefits and roll back public union collective bargaining rights.

“Don’t let anyone tell you that the government workers in Wisconsin are losing their collective bargaining rights over wages,” Bachmann said in a speech to a South Carolina Republican women’s group.

“They are not. They are retaining them. It’s their collective bargaining right over their benefits.”

END_OF_DOCUMENT_TOKEN_TO_BE_REPLACED

At a press conference, Walker said he could not consider the offer by the largest state workers union because it only covered some public employees and came late in the process.

Walker and other Republicans have been trying to pass a controversial bill that would end a half-century of collective bargaining for most public workers in Wisconsin.

In Egypt, workers are having a revolutionary February. In the United States, by contrast, February is shaping up as the cruelest month workers have known in decades.

But even as workers were helping topple the regime in Cairo, one state government in particular was moving to topple workers’ organizations here in the United States. Last Friday, Scott Walker, Wisconsin’s new Republican governor, proposed taking away most collective bargaining rights of public employees.

END_OF_DOCUMENT_TOKEN_TO_BE_REPLACED

Indiana Gov. Mitch Daniels, the last of the possible Republican presidential candidates to address CPAC on Friday, strode to the podium at tonight’s Ronald Reagan Banquet and turned back the clock to the 1980s: the thing we have to fear, he said, is the growing Red Threat.

“In our nation, in our time, the friends of freedom have an assignment, as great as those of the 1860s, or the 1940s, or the long twilight of the Cold War,” he said. “As in those days, the American project is menaced by a survival-level threat.”

“I refer, of course, to the debts our nation has amassed for itself over decades of indulgence,” he added. “It is the new Red Menace, this time consisting of ink.”

Hosni Mubarak used the 18 days it took for protesters to topple him to shift his vast wealth into untraceable accounts overseas, Western intelligence sources have said.

END_OF_DOCUMENT_TOKEN_TO_BE_REPLACED

Why is Beck selling this fear? Because he  doesn’t want to deal with the problem at hand. It’s too tricky for him, as it is for most of us. So what are Beck and the troublemakers doing? They’re scaring people into a frenzy over the coming of a global caliphate. And to what effect? To fight for Mubarak? To place blame if we don’t? To encourage Mubarak to fight the people in the streets? No. I’ll bet Its to begin a long campaign of fear, something to talk about on the radio, something to scare people with. 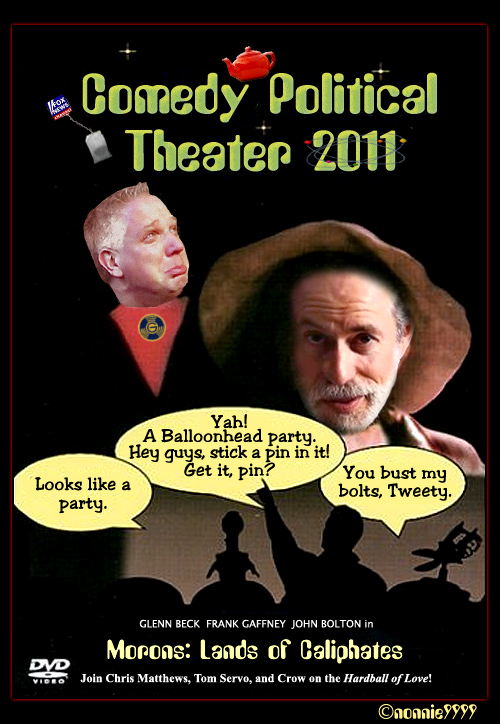 END_OF_DOCUMENT_TOKEN_TO_BE_REPLACED

Amidst the political upheaval in Egypt, conservatives are scare-mongering about the possible Muslim Brotherhood takeover of Egypt. But leading neoconservative Frank Gaffney is taking Muslim Brotherhood fearmongering to new heights. This past weekend, Gaffney was a featured speaker at the Educational Policy Conference in St. Louis, an annual gathering of social conservatives. Gaffney used the opportunity to discuss how the Muslim Brotherhood is not only poised to implement a new theocracy in Egypt, but is also operating in the United States under “front groups” like the Council on American-Islamic Relations, a civil liberties group dedicated to “protecting the rights of all Americans, regardless of faith.”