Housing and Urban Development Secretary Ben Carson downplayed his “REO” gaffe during a congressional hearing on Tuesday and claimed the incident was attributed to partisan attempts “to ridicule people.”

“We throw around acronyms all the time, particularly in government,” Carson said in an interview with The Hill. “And you don’t really even think about what do the letters mean? But you know what the things is.”

I wonder if he had the same kind of acronym problem when he was in medicine. After all, does what EEG stands for really important to a neurosurgeon? Anyhoo, in other news, the new HUD seal was revealed today.

END_OF_DOCUMENT_TOKEN_TO_BE_REPLACED

Housing and Urban Development (HUD) Secretary Ben Carson was quizzed at a hearing on Capitol Hill Tuesday, resulting in yet another viral moment for the cabinet official. Appearing before the House Financial Services Committee for an oversight hearing, Democratic Rep. Katie Porter asked Carson to help define what “REOs” are.

For those not in well-versed in housing terminology, “REO” stands for “real estate owned” — a term used to describe foreclosed property that has been transferred back to a bank or lender after an unsuccessful auction. Banks will typically sell REO properties as-is, meaning the buyer buys the home and all the problems along with it.

Carson, however, appeared to have misheard Porter, thinking she was referring to the delicious chocolate sandwich cookie.

END_OF_DOCUMENT_TOKEN_TO_BE_REPLACED

If Rick Santorum isn’t sexy enough for you, here’s Thaddeus!

Thaddeus McCotter, a US Representative from Michigan whose agenda appeals to tea party activists, announced his bid Saturday to win the Republican presidential nomination.

Rep. McCotter champions lower federal taxes, energy independence from foreign sources of oil, he is against illegal immigrants receiving government benefits and he endorses the concept of American “exceptionalism” regarding foreign policy.

END_OF_DOCUMENT_TOKEN_TO_BE_REPLACED

They want to repeal the healthcare overhaul, pare back financial regulations, slash federal spending and curtail the reach of the Environmental Protection Agency. In essence, they want to challenge the agenda of the Obama administration at every turn.

The new GOP chairmen of key House committees such as Appropriations, Budget, Energy and Commerce, and Oversight and Government Reform believe they have a mandate to check the size and scope of government. 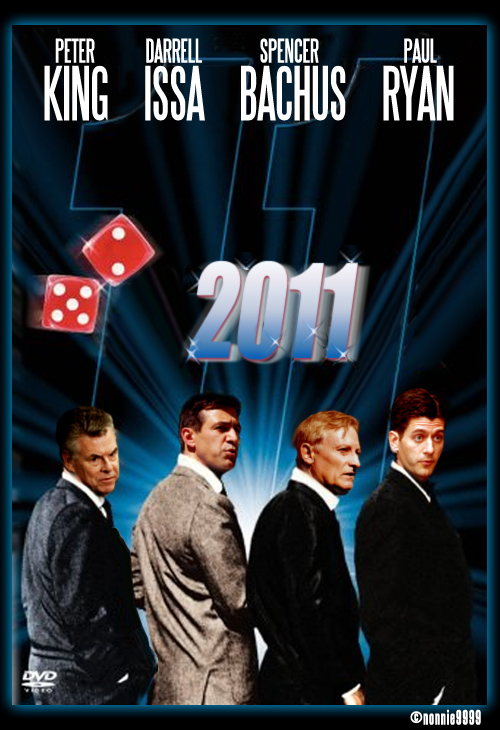 I know he’s telling the truth–his lips are moving!

Democratic Representative Alan Grayson of Florida, who has come under fire from Republicans for suggesting on the House floor Tuesday night that “Republicans want you to die quickly if you get sick,” said in an interview with CBSNews.com Wednesday that the response to his comments has been “overwhelmingly positive.”

“People are calling us from all over the country to congratulate us for telling the truth,” he said. “People are happy to see a Democrat with guts.”

Citigroup Inc. Chief Executive Vikram Pandit and Bank of America Corp. Chief Executive Ken Lewis issued strongly worded internal memos about the proposed tax legislation, according to the online edition of The Wall Street Journal, while J.P. Morgan Chase & Co. Chief Executive Jamie Dimon sought to reassure his top executives that the firm is engaging with lawmakers on the matter.
The legislation, passed by the House on Thursday, would impose a 90% tax on bonuses for employees making over $250,000 a year at companies receiving at least $5 billion in federal aid under the Troubled Asset Relief Program, or TARP.
Citi’s Pandit criticized the proposed legislation in a memo to employees on Friday, arguing that it could result in the firm losing top talent.

Who Ya Gonna Call?

(CNN) — Senate Democrats and the White House failed to find 60 votes to end debate on a $14 billion auto bailout bill and bring it to a vote Thursday night, killing the measure for the year.

The 52-35 vote followed the collapse of negotiations between Senate Democrats and Republicans seeking a compromise.

I Wonder how $520 Ferragamo Loafers Taste

From the Interational Herald Tribune:

WASHINGTON: Republican John McCain has maneuvered himself into a political dead end and has five weeks to find his way out.