Twitler opened his shithole, and shit fell out

President Donald Trump made racially-charged comments during a meeting on immigration with lawmakers on Thursday, asking why the U.S. admits people from “shithole countries,” according to two people familiar with the meeting.

The White House did not deny Trump made the remarks. 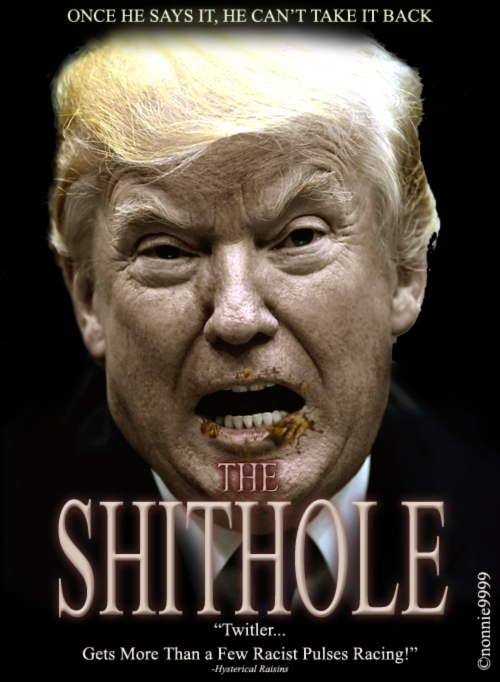 END_OF_DOCUMENT_TOKEN_TO_BE_REPLACED

Following the devastating earthquake in Haiti this week, many activists and politicians have heightened the cry for granting undocumented Haitians in the U.S. Temporary Protected Status (TPS). TPS is a longstanding cornerstone of U.S. immigration policy that is afforded to undocumented immigrants from a small number of federally-designated countries suffering armed conflicts, natural disasters, or other extraordinary circumstances until conditions improve. Many claim Haitians should’ve received TPS after four consecutive tropical cyclones in 2008 left 800 people dead, hundreds missing, and made the Haitian city of Gonaives “uninhabitable.” However, Rep. Steve King (R-IA) seems to think that not only were undocumented Haitians undeserving of TPS status then, undocumented Haitians living in the U.S. should now be deported back to their country to specifically serve as much-needed relief workers.

END_OF_DOCUMENT_TOKEN_TO_BE_REPLACED

GOP: How do you solve a problem like Maria? Oops, make that Sonia.

President Barack Obama’s first Supreme Court nominee, Second District Appeals Court Judge Sonia Sotomayor, began taking hits from the right as her nomination was announced Tuesday morning, with top conservatives describing her as a hardline liberal who would impose her personal agenda on the Court.

Former Arkansas Gov. Mike Huckabee called Sotomayor’s appointment “the clearest indication yet that President Obama’s campaign promises to be a centrist and think in a bipartisan way were mere rhetoric.”

(And by the way, kids, he didn’t even get her name right when he started bitching and moaning about her. He called her Maria.)

END_OF_DOCUMENT_TOKEN_TO_BE_REPLACED

State and local emergency officials said they are looking into plans to provide ice following a hurricane after federal officials said earlier this year that they would no longer supply it.

FEMA head R. David Paulison surprised many coastal leaders when he announced in April that the agency would only distribute ice for medical emergencies or life-threatening situations.