Mike Huckabee […] has started a project, “Learn Our History,” where on a monthly basis–sort of like BMG or Columbia House music–Huckabee’s organization will send subscribers Time Travel Academy, an animated children’s cartoon featuring a group of intrepid time travelers who teach lessons about U.S. history “without a political bias.”

If judged by its artistic qualities, the cartoon is so poorly done as to be a pitiable joke. Its main characters are a contrived group of multicultural “tweens.” The history is predictable: Ronald Reagan is America’s savior, America is a Judeo-Christian country preordained by God to be exceptional, and flag-waving jingoistic nationalism is a virtue and never a sin. The guiding principle of this right-wing approved version of U.S. history is simple: “What we see and hear isn’t always the same as what we read in books, or see on TV. We know the truth. And that’s good enough for us.”

END_OF_DOCUMENT_TOKEN_TO_BE_REPLACED

How much more American can you get than fast food?  Just don’t have to get all bent out of shape over condiments like Laura Ingraham, Sean Hannity, and Mark Steyn do… 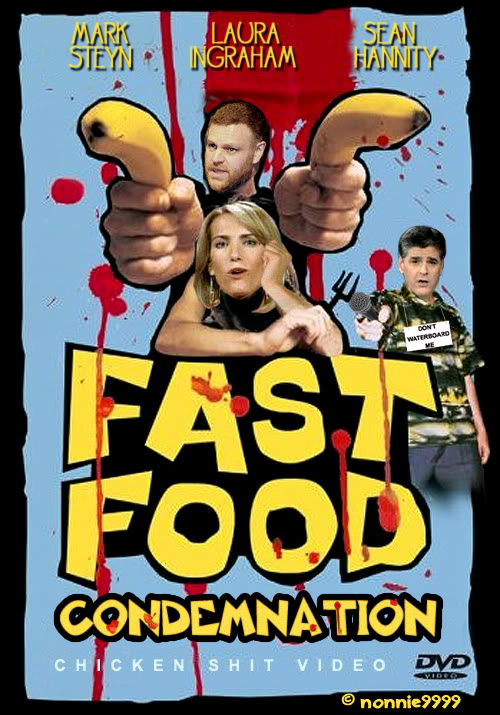 END_OF_DOCUMENT_TOKEN_TO_BE_REPLACED

I just got home, and I have nothing prepared, so I’m dusting off another American Street oldie goldie. Since Captain Underpants is being a total dick about DADT, I picked out a post about him. It was originally posted on March 19, 2008.

Hey kids! Anyone else watch Dancing With the Stars? Yeah, I admit it, I have watched every season. I am just getting over the nightmares I had last season after seeing the flesh on Wayne Newton’s face stretched so tight that, every time he raised his eyebrows, his manboobs jiggled.

So anyway, I tune in to watch this season, and there’s Priscilla Presley with so much botox and collagen in her face that she has to wear this

around her neck! Seriously, these people are so friggin’ rich, and they still can’t afford a plastic surgeon who doesn’t make people look like The Joker from Batman? She couldn’t even smile!!! I’m not kidding! I bet she has to eat through a straw, because I don’t think her jaw can move enough to chew! Seriously, you have to watch just to see her face!

But I digress. This isn’t about Dancing With the Stars, Mr. Danke Schoen, or Elvis’s ex. So what is this about? Damned if I remember. Hold on, I think I wrote it down somewhere……Oh, yeah!! It’s about John McCain! Dancing John McCain!
It all started back in April of 2007. I reported on John McCain’s trip to Baghdad. That’s when I first spotted his propensity for dancing.

(You can find a larger version and the song he was dancing to here. Go ahead, sing along. I’ll wait for you.)

Trip the light fantastic with me, and I will show you more of John McCain’s twinkletoes, as well as some advice I have for him.
END_OF_DOCUMENT_TOKEN_TO_BE_REPLACED

The Macaca Awards! And the Winners Are…

In this last post about this round of the 1st Semi-Regular Macaca Awards, let’s remember what the award is all about.  Once again, I will borrow the words of my handsome and talented collaborator, Tengrain, of Mock, Paper, Scissors:

It seems so long ago that George Allen uttered the words that moved a generation (and sank his political career), and forever seared the word Macaca into our collective brain.
And so we honor all that is appalling in American Politics with the First Semi-Regular Macaca Awards. 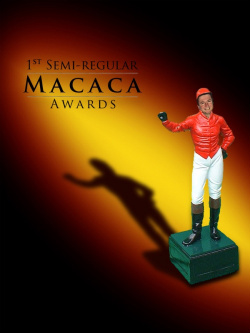 Welcome our special presenters who will be handing out the awards.

END_OF_DOCUMENT_TOKEN_TO_BE_REPLACED

This year should be a blowout for Republicans. 2010 is a year when voter dissatisfaction is extreme, high unemployment lingers, and Republican turnout is expected to be strong. Yet one group of Republican candidates is performing poorly in races from coast to coast. Why did Republicans choose such a weak bunch of women?

Right-wing media figures are attacking Fox News’ Karl Rove for “trashing” Christine O’Donnell after her victory in the Delaware GOP Senate primary, stating that his comments were “disgraceful” and that Rove “came across as an effete sore loser.”

The benefit of this Rand Paul escapade is that his sincerely held views are on full display, and thus the ideology of the “liberty” movement gets a serious airing for the first time. But it’s not like anyone should be surprised by these views. Paul’s father said almost verbatim the same thing on Meet the Press in 2007. He wasn’t considered “serious” by the traditional media at the time. But now that there are tea party beat writers and they’re the newest rage in Washington, this gets exposure.