Just when you thought the Barr couldn’t get any lower

For anyone concerned that President Donald Trump and Attorney General Bill Barr are politicizing the criminal justice system, Friday afternoon has been a real roller coaster.

First, news broke that Justice Department prosecutors had closed one politically controversial case, a lengthy criminal investigation into former Deputy FBI Director Andrew McCabe, without bringing any charges. McCabe had been under scrutiny for potentially lying to internal investigators about his role in leaks concerning an FBI investigation into the Clinton Foundation — though many wondered whether the investigation was truly about pursuing someone President Trump had deemed an enemy.

END_OF_DOCUMENT_TOKEN_TO_BE_REPLACED

Comments Off on Jared Kushner, the only one in the White House who can get served in D.C.

It goes from bad to Twitterverse 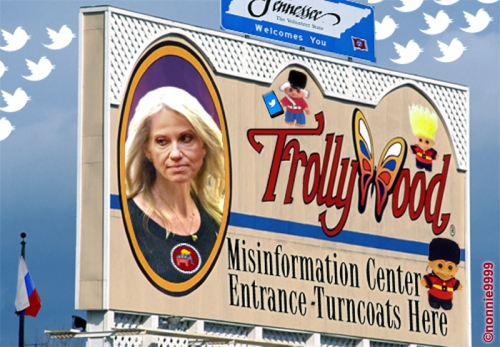 END_OF_DOCUMENT_TOKEN_TO_BE_REPLACED

Now that he’s president, Trump frequently departs the White House and spends the weekend golfing at either his South Florida resort, Mar-a-Lago, or his country club in the New Jersey suburb of Bedminster. The promise he’d made a year before was discarded so quickly, you have to wonder if he even remembers making it. Politico did the legwork: George W. Bush didn’t golf for the first five months of his presidency, while Obama stayed away from his beloved links for four months following his inauguration. Trump held out for all of two weeks. He has visited a golf club 40 times since taking office in January, according to the self-explanatory site Trump Golf Count, which estimates the forays have cost American taxpayers $55 million. Another Trump tracker, this one by The New York Times, finds that his visits to Trump-branded properties total 56 days, nearly a third of his time in office.

END_OF_DOCUMENT_TOKEN_TO_BE_REPLACED

The InfoWars founder hosted the political dirty trickster — who’s under investigation for possible ties to Russian intelligence — on his program Friday to discuss the military action.

The conversation followed a conspiratorial trail that led from Syria through the West Wing to the Upper West Side, and all the way to Silicon Valley, and fell apart when Jones blamed Kushner and his wife, Ivanka Trump, for every bad decision made so far by the president.

With sincere apologies to Normal Rockwell (Freedom From Fear)

END_OF_DOCUMENT_TOKEN_TO_BE_REPLACED

He went to Jared!

The speculation began almost immediately after Donald Trump was elected: Who would have the ear of the famously unpredictable 45th president?

For a time it appeared that White House adviser Steve Bannon, memorably depicted as the Grim Reaper on “Saturday Night Live,” was the power behind the throne. Another trusted aide, Kellyanne Conway, was also said to be an influential member of Trump’s inner circle. And then there were Vice President Mike Pence, Chief of Staff Reince Priebus and Senior Policy Adviser Stephen Miller — all skilled and ambitious political animals vying for the boss’ attention.

But two months into Trump’s presidency, it’s becoming clear that blood and family have trumped ambition on Pennsylvania Avenue with First Daughter Ivanka Trump emerging as a powerbroker in her own right, along with her husband Jared Kushner. 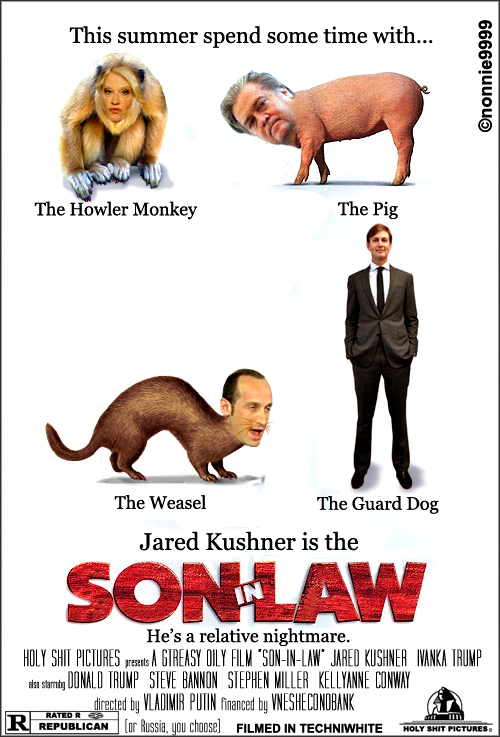 END_OF_DOCUMENT_TOKEN_TO_BE_REPLACED

From Conor Friedersdorf at The Atlantic:

Representative Devin Nunes, a Republican, is chairman of the House Intelligence Committee. He is therefore leading a key probe into whether or not Donald Trump’s presidential campaign had ties to Russian meddling in the 2016 election.

Can an inquiry he leads be trusted?