The Price Is Wrong

From Steve Benen at The Maddow Blog at MSNBC:

The reason there’s so much interest in who Donald Trump will choose for various positions in his administration is a simple principle: personnel is policy. We want to know what the Trump/Pence administration will do once it’s in power, so we keep an eye on his cabinet and White House selections to get a sense of the next White House’s substantive agenda.

And when it comes to health care, the president-elect apparently intends to go in a very dangerous direction.

President-elect Donald Trump announced Tuesday that he will nominate Georgia Rep. Tom Price to head the Department of Health and Human Services.

END_OF_DOCUMENT_TOKEN_TO_BE_REPLACED

From THE TICKET at YAHOO! NEWS:

When NBC’s Brian Williams asked former Gov. Mitt Romney at the most recent Republican presidential debate if he considers himself “a member of the tea party,” it may have been the toughest question of the night.

As anyone who aligns himself with the small-government movement will tell you, the question was overly simplistic–the tea party is more of an intellectual concept than an actual centralized organization–but Williams’ question clearly struck a nerve. It was one of the only questions during the debate that Romney hesitated before answering, and his meandering response took far more time and effort than what some of his contenders would have expended in the same exchange.  Herman Cain, for instance, probably would have whistled by the query and just said, “Yes.” 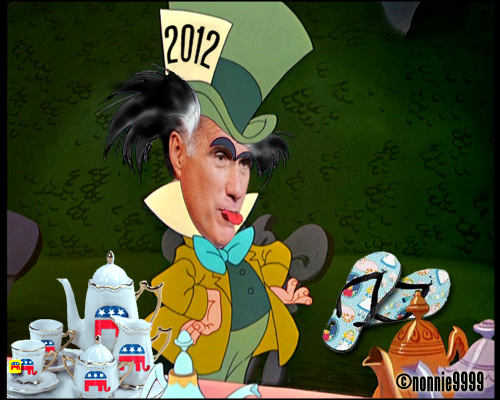 It used to be his party, and he’ll cry if he wants to.

Tuesday’s breakdown in Republican discipline weakens Speaker John Boehner’s hand in White House budget talks and raises the chances of a government shutdown next month unless he and President Barack Obama greatly step up their game.

Fifty-four Republicans broke ranks with Boehner, leaving him suddenly dependent on Democrats to win House approval of a must-pass three-week spending bill to keep the government operating past Friday. Tea-party-backed freshmen contributed to the embarrassment, but an equal force was a set of more veteran conservatives — some with their own political agenda but also more willing to risk an immediate fight with the White House.

From politicalticker at CNN:

At a time when the former Alaska governor appears to be shrinking from the spotlight, Minnesota Rep. Michele Bachmann is stepping up as yet another favorite daughter of the conservative movement.

But it remains to be seen whether embarrassing and highly publicized gaffes will affect her presidential chances.

END_OF_DOCUMENT_TOKEN_TO_BE_REPLACED

The Fine Art of Batshittery

From Andrew Romano at THE DAILY BEAST:

Within hours of winning her third congressional term in November, the colorful Minnesota Republican began campaigning for conference chair, the No. 4 position in the House GOP leadership. Why? Because “constitutional conservatives”—like her and, presumably, unlike the rest of John Boehner’s team—”deserve a loud and clear voice!” A few weeks later, news leaked that Bachmann would be traveling to Iowa for a fundraiser—and that “nothing,” according to her spokesman, “is off the table.” Asked whether she was considering a presidential run, Bachmann told ABC News “I’m going to Iowa—there’s your answer.”

Then on Friday Bachmann announced that even though Wisconsin Rep. Paul Ryan is slated to deliver the official Republican response to President Obama’s upcoming State of the Union address, she would be giving her own online rebuttal on behalf of the Tea Party Express “shortly after” Ryan’s speech concludes.

A newly-launched Tea Party caucus in the U.S. Senate will hold its first meeting on January 27, Roll Call reports.

Sen. Rand Paul (R-Ky.), who announced the creation of the political affinity group last week, first spoke of the idea during the 2010 midterm campaign. Shortly after floating the concept, Rep. Michele Bachmann (R-Minn.) took it upon herself to introduce the idea into the U.S. House of Representatives.

Roll Call reports that Sens. Jim DeMint (R-S.C.) and Mike Lee (R-Utah) will be members of the new caucus in the upper congressional chamber.

Sen. Rand Paul on Friday announced the launch of the Senate Tea Party Caucus, making good on an idea he floated during last year’s campaign.

GOP Sens. Jim DeMint (S.C.) and Mike Lee (Utah) will join the Kentucky Republican as the first members of the caucus.