From THE DAILY CALLER:

It’s a tradition stretching back 130 years: Local and national candidates meet annually in Fancy Farm, Kentucky to deliver their best and most colorful one-liners against opponents and scream fiery speeches full of partisan red meat to a raucous crowd hungry to hear rhetorical arrows flung across the aisle.

Every year, thousands gather at the politically themed picnic hosted by St. Jerome Catholic Church in rural western Kentucky to hear rousing political speeches, and the event is known as the unofficial start of the campaign season in the state.

Unfortunately for one of this year’s speakers, Republican Kentucky Senate candidate Rand Paul, it seemed he missed the memo that he was there to excite members of the audience, not put them to sleep. 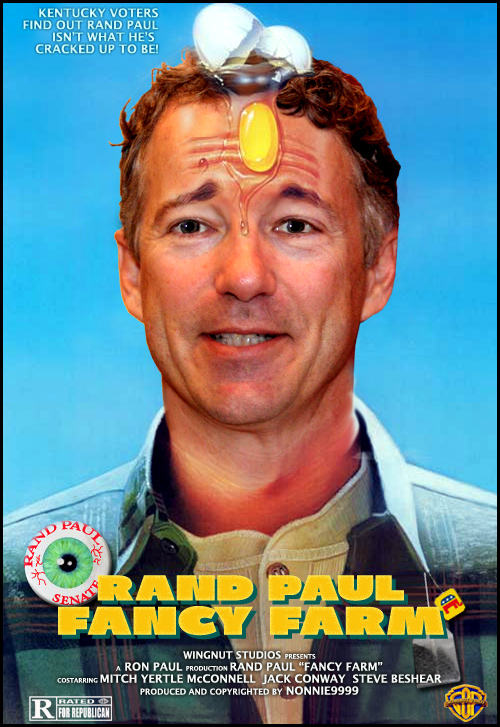 Senate Minority Leader Mitch McConnell backed the wrong horse in the Senate primary back home in Kentucky and now he’s paying the price with state Republicans. A new PPP (D) poll out today shows McConnell’s approval rating has fallen to a record low 34% in his home state.

Even worse for McConnell is that only 38% of voters surveyed said that they want McConnell to remain the head of his party’s caucus in the Senate. Almost half — 49% — said they don’t think McConnell should keep his job as Republican leader.

END_OF_DOCUMENT_TOKEN_TO_BE_REPLACED

From David Weigel at Right Now at The Washington Post:

Nevada GOP U.S. Senate candidate Sharron Angle, who never courted the media the way Rand Paul did, has avoided her fellow “tea party” favorite’s mistakes, keeping fairly quiet since securing the nomination Tuesday. That hasn’t stopped Democrats from making Angle the star of their story about the 2010 elections — a saga of tea party activists saddling the GOP with candidates that even an angry electorate can’t possibly send to Washington.

END_OF_DOCUMENT_TOKEN_TO_BE_REPLACED

Chuck DeVore says he’s created a ‘huge reservoir’ of volunteers, but he’s stuck at 16% in polls. Carly Fiorina, who’s rising in polls, says she does not intend to cede conservative activists.

In a year when the imprimatur of the tea party swept Scott Brown to a Senate victory in Massachusetts and helped Rand Paul knock off the establishment Senate candidate in Kentucky — both DeVore and Fiorina are actively courting tea party support.

END_OF_DOCUMENT_TOKEN_TO_BE_REPLACED

Not-So-Super Tuesday for Some People

It was a bittersweet night for Democrats as they won a House special election but saw one senator fall and another incumbent go to a runoff.

Meanwhile Republicans saw their favored Senate candidate lose in Kentucky to a darling of the Tea Party movement.

Most of all, Tuesday’s primaries were another sign of the anti-incumbent mood that has swept the nation and has lawmakers worried about their futures.

END_OF_DOCUMENT_TOKEN_TO_BE_REPLACED

From Hotline On Call at the National Journal:

Last week, Dobson endorsed KY Sec/State Trey Grayson (R), the establishment favorite to take over for Bunning. He did so because Dobson believed Grayson was better on abortion issues than ophthalmologist Rand Paul (R), who leads some recent polls.

In fact, Paul is pro-life himself. Dobson acknowledged the mistake and blamed GOP officials for spreading false information.