War of Words? No, War of Turds

Stephen Bannon said in his first public remarks since his ouster from White House role as chief strategist that he will be “going to war” for President Donald Trump, warning that he will continue to press the populist cause against the political and corporate establishment.

Kids, whatever happens, just remember that Steve Bannon didn’t ride in on his high horse;  the drunken pile of offal rode in on a Rethuglican elephant! He’s one of their own, so when the Alt-right puts up their statue of their war hero, they need to get it right. 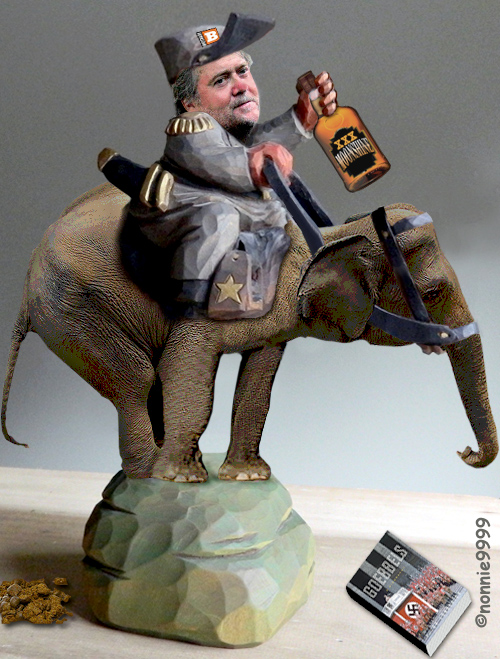 “If there’s any confusion out there, let me clear it up: I’m leaving the White House and going to war for Trump against his opponents — on Capitol Hill, in the media, and in corporate America,” Bannon said Friday in an interview with Bloomberg News hours after his departure was announced by the administration.

Bannon left the White House Friday, ending a controversial tenure as the administration is engulfed in a storm over the president’s remarks on violence in Virginia. Bannon’s departure was agreed on mutually with new White House Chief of Staff John Kelly, White House press secretary Sarah Sanders said.

His exit caps a tumultuous four weeks in which a slew of senior officials have announced their departures, including the former White House chief of staff Reince Priebus, former press secretary Sean Spicer and former communications director Anthony Scaramucci, who was hired and fired within the space of 11 days.

Bannon, 63, the chief executive of Trump’s presidential campaign and an architect of his election victory, was the leading champion of conservative populism within the administration. The former chairman of Breitbart News, Bannon served as a link to the so-called “alt-right” movement attuned to the attitudes of the most conservative elements of the president’s base.

Bannon had advocated that the president delve into racial issues and applauded Trump’s widely criticized handling of the Charlottesville situation. The president appeared to press forward with that strategy with a series of tweets Thursday morning decrying the removal of Confederate statues.

House Democratic Leader Nancy Pelosi of California called Bannon’s ouster “welcome news, but it doesn’t disguise where President Trump himself stands on white supremacists and the bigoted beliefs they advance.”

“Personnel changes are worthless so long as President Trump continues to advance policies that disgrace our cherished American values,” she added.

A person close to Bannon portrayed his departure as unrelated to the backlash against Trump’s comments this week that appeared to confer legitimacy on white supremacists following the violence in Virginia. The person said Bannon had turned in his resignation on Aug. 7 to take effect on Aug. 14.

Bannon, whose relationship with Trump was forged through campaign battles, has been one of the president’s closest advisers, skilled at infighting and cultivating the media. His departure strengthens Kelly, who has sought to better organize a West Wing known for chaos and disorder.

The move also will bolster Bannon’s rivals within the administration, including National Security Adviser H.R. McMaster and top economic aide Gary Cohn, with whom Bannon frequently clashed over policy. During an interview Sunday with NBC News, McMaster pointedly and repeatedly refused to say whether he could effectively work with Bannon going forward.

But moving Bannon outside the White House raises new risks. Even if he continues to support the president, he may become aggressive in attacking the administration’s more traditional Republican players and policies. He has ample access to funding through his close relationships with conservative billionaire Bob Mercer and other major Republican donors.

Some in the White House disagreed with the decision to oust Bannon, and argued that the move weakened the president’s ability to translate his ideas into policy.

Bannon led an editorial meeting at Breitbart News before the redness on his ass had time to fade after the White House door had hit him.

Put your goggles on, kids, ’cause the shit will be flying really soon.