In a bit of political theater, Senate Democrats plan to hold Republicans hostage on the floor and continually reject moving to debate on the Wall Street reform bill as a means to highlight the obstructionism and hopefully break the impasse.

A senior leadership aide described this stunt as similar to what they did when Jim Bunning would not give consent on the unemployment insurance extension. The press was very negative toward Bunning and the Republicans, and eventually they caved. Democrats are hopeful that they can force the hand of those who have wavered on the FinReg bill – George Voinovich, Susan Collins, Olympia Snowe and others – and “seal the deal” on moving to a floor debate on it. It is likely that Democrats would need more than one Republican to get 60 votes, as Ben Nelson “doesn’t seem like he’s budging,” the aide said.

END_OF_DOCUMENT_TOKEN_TO_BE_REPLACED

Is that Richie and Potsie? No, it’s Russ and a Nazi!

From CROOKS AND LIARS:

There are some things about state Sen. Russell Pearce, the author of Arizona’s new police-state immigration law, that Greta Van Susteren and all the other Fox anchors who’ve had him on this past week aren’t telling you.

Well, we mentioned previously that Pearce has a colorful background involving the white-supremacist far right, including dalliances — like his close pal Sheriff Joe Arpaio — with neo-Nazis.

END_OF_DOCUMENT_TOKEN_TO_BE_REPLACED

Forget Job, Get a Job!

From THE RESTORATION OF STEPHEN BALDWIN (No, kids, I’m not making this up):

Stephen Baldwin of the famous “Baldwin Brothers” Hollywood clan is a veteran actor who has starred in over 60 films and TV shows. He is no stranger to the Hollywood life of glitz, glamour and the public eye.

In 2002, he had an experience that changed his life forever. He became a Born Again Christian, giving his life to Jesus Christ. Over the next few years, he became very vocal about his faith, using his spotlight to boldly preach the gospel. However, because of this convictions it has caused him the loss of many jobs and the most recently, a highly publicized bankruptcy.

He has been publicly ridiculed and insulted by people who think that he has been abandoned by God. A simple search through the internet will reveal that people not only mock Stephen, but mock God.

In response to this (with the permission of Stephen’s ministry President Daniel Southern) we have established RestoreStephenBaldwin.org. A privately funded and managed website. Our vision is to see Stephen Baldwin publicly restored in front of millions.

END_OF_DOCUMENT_TOKEN_TO_BE_REPLACED

Arizona‘s controversial immigration enforcement law was the target of fresh attacks Sunday as opponents, from national civil rights activists to Phoenix Mayor Phil Gordon, vowed to take their fight to the courts as soon as this week.

Gordon, a Democrat, joined some federal lawmakers, including Rep. Raúl Grijalva, D-Ariz., and about 3,500 protesters Sunday at the Arizona Capitol, assailing the measure signed Friday by Republican Gov. Jan Brewer as a “racist and unjust” attempt at achieving an overhaul of the USA’s immigration policies.

END_OF_DOCUMENT_TOKEN_TO_BE_REPLACED

As Media Matters noted in a special report released this week:

In recent years, at least twenty Fox News personalities have endorsed, raised money, or campaigned for Republican candidates or causes, or against Democratic candidates or causes, in more than 300 instances and in at least 49 states. Republican parties and officials have routinely touted these personalities’ affiliations with Fox News to sell and promote their events.

Now the Associated Press is reporting that Governor Rick Perry (R-TX) — whose prospects for reelection in November are considered a “toss-up” by prominent political analyst Charlie Cook — is slated to participate in Fox News host Glenn Beck’s traveling road-show today when it touches down in Texas:

With his Republican primary victory safely behind him, Texas Gov. Rick Perry is still working hard to court conservative voters.

Perry, who is running for a third full term in office, is scheduled to speak Saturday night at conservative radio and television talk show host Glenn Beck’s “Taking Back America” town hall event in Tyler.

END_OF_DOCUMENT_TOKEN_TO_BE_REPLACED

Mexicans crossing the border with mules! No, not burros, shoes!

From the NORTH COUNTY TIMES:

Rep. Brian Bilbray, R-Solana Beach, was criticized this week by civil and immigrant rights groups for saying that law enforcement professionals could spot illegal immigrants by the way they dress.

On Wednesday, Bilbray was a guest on the MSNBC TV show “Hardball” with Chris Matthews. He was asked his opinion of an Arizona bill that would require local police to question people about their immigration status if there was reason to suspect they were in the country illegally.

Original DVD cover
(The shoe is the Nike Air Max 95 – Mexican Blanket. I’m not making that up.)
END_OF_DOCUMENT_TOKEN_TO_BE_REPLACED

Why did my doctor just take my temperature with a meat thermometer?

From the NEVADA APPEAL:

RENO — U.S. Senate candidate Sue Lowden said Thursday that Harry Reid is trying to make her look bad over remarks suggesting a return to the barter system with doctors.

“Harry Reid is trying to change the subject from his 2,700 pages of government-run health care,” she said after a breakfast meeting in Reno. 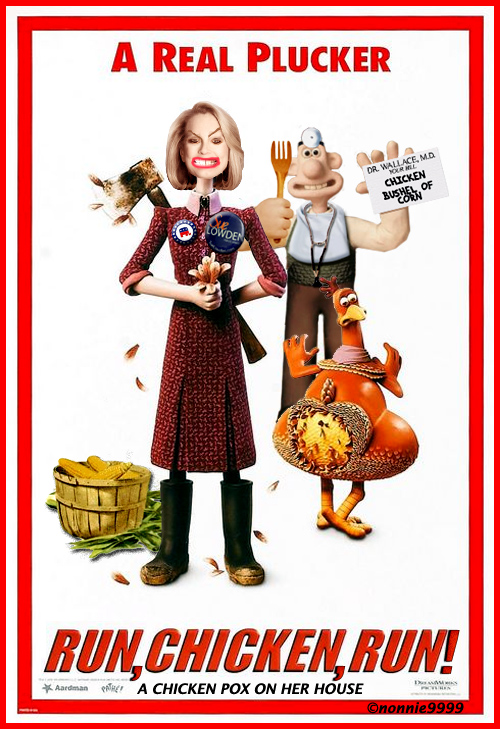 Sue Lowden, a Republican candidate challenging Majority Leader Harry Reid for his Nevada Senate seat is refusing to back down from an earlier suggestion that America consider a medical barter system as an alternative to current health care solutions.

On Monday Lowden took the idea one step further.

“Before we all started having health care, in the olden days, our grandparents, they would bring a chicken to the doctor,” Lowden told a local news station. “They would say I’ll paint your house.”

If we could only breed chickens who are delicious and who could paint houses, that would be perfect!