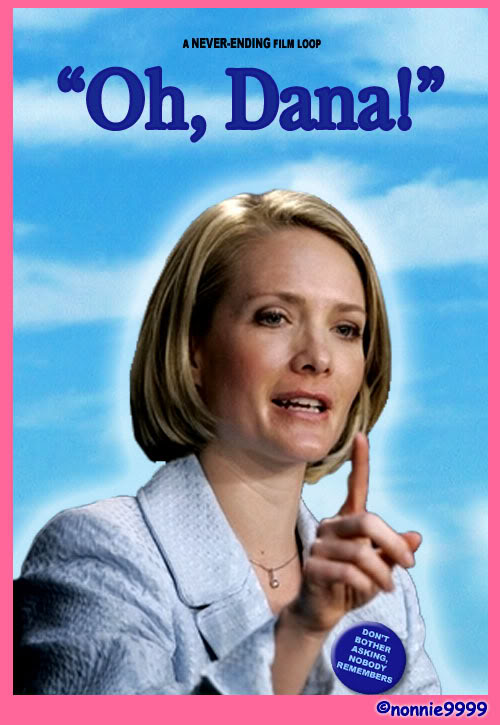 “I was panicked a bit because I really don’t know about . . . the Cuban Missile Crisis,” said Perino, who at 35 was born about a decade after the 1962 U.S.-Soviet nuclear showdown. “It had to do with Cuba and missiles, I’m pretty sure.”

So she consulted her best source. “I came home and I asked my husband,” she recalled. “I said, ‘Wasn’t that like the Bay of Pigs thing?’ And he said, ‘Oh, Dana.’

She is bragging about how uninformed she is? Well, that deserves nothing less than a song!

Don’t know much about history,
Why I’m here’s a mystery,
Never opened any science books,
I was hired strictly for my looks.

Though my answers make your hair curl,
It’s not nice to beat up on a girl,
And that’s why I’m press sec-re-tar-y.

Don’t know much about geography,
(My boss knows even less than me,)
I’m like Chimpy, ‘cept I wear a bra,
As I shit upon the rule of law.

Really don’t know very much at all,
So I stammer and dodge and stall
That’s my job as press sec-re-tar-y.

Now, you know, I work for a C student,
Dumb as he can be,
But maybe they think, if I do the talking,
He’ll look smart compared to me!

Don’t know much about ecology,
Not a clue ’bout the economy,
I know that I sound really dumb,
As I stand behind the podium,

But Karl Rove seems to see some promise,
In my answers to Helen Thomas,
He’s got to be dumber than me!

Really don’t know very much at all,
So I stammer and dodge and stall
That’s my job as press sec-re-tar-y.

19 responses to “A Musical Tribute to Dana Perino”