Cooking up a rigged election

From The Daily Dot:

A man known as Russian president Vladimir Putin’s “chef” was reportedly behind the financing of the Russia-based “troll factory” that used social media to spread fake news and disinformation ahead of the 2016 election, according to reports.

CNN reports that a company owned by Yevgeny Prigozhin, who has been dubbed Putin’s “chef,” was a “main backer” of the Internet Research Agency, which was allegedly responsible for buying at least more than $100,000 worth of ads meant to stir division about divisive issues on Facebook ahead of the election. 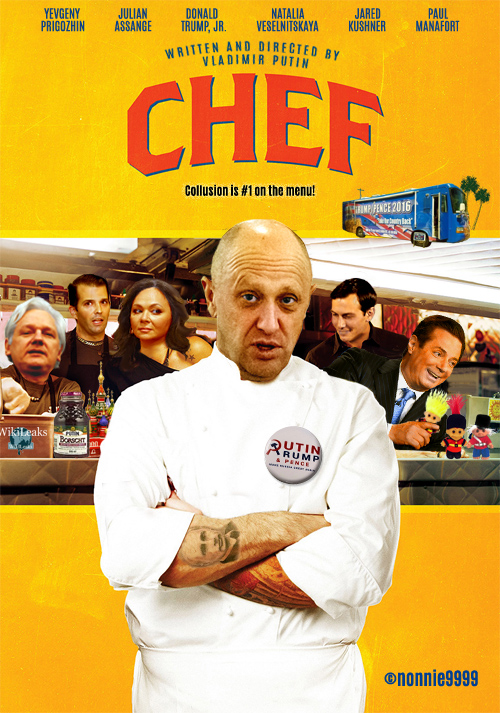 Documents obtained by the news agency show that the Internet Research Agency had ties to a Prigozhin’s Concord Management and Consulting for construction work and that an employee of the firm went on to work at the Russia-based so-called “troll factory.”

U.S. investigators believe Prigozhin’s businessness “financed” the Internet Research Agency, CNN reports. The agency reportedly had a division called the “Department of Provocations” which was dedicated to spreading fake news in “the West,” according to documents obtained by CNN.

YEVGENY Prigozhin is a chef, a businessman and apparently — a troll.

United States investigators believe he was behind a “fake news” campaign that may have helped get Donald Trump into the oval office and that he financed Russia’s “troll factory”.

So who actually is he?

Mr Prigozhin is technically employed as Vladimir Putin’s cook, and he served caviar and truffles to US President George W. Bush all the way back in 2002.

He owns a number of exclusive restaurants, a successful catering business with lucrative contracts to supply schools and Russia’s armed forces, as well as his own food-processing factories.

However, the 56-year-old father-of-two allegedly has his fingers in a lot of other pies.

He’s believed to have been the main financier of a secretive technology firm in St Petersburg, his hometown, known as the “Internet Research Agency”.

During the election, CNN reported, the company was able to monitor social media and tamper with search engine results through “a system of automised promotion”.

Documents suggest it had been operating for years and spent more than $US1 million (A$1.27 million) a month since at least 2013.

The “troll factory” was reportedly tasked with researching every aspect of America and all the issues the country was dealing with — such as tax problems, gay rights, and weapons regulation — so it could influence discussions online, and lead it astray.

He was sanctioned by the US in 2016 for providing financial support for Russia’s military occupation of Ukraine.

He also spent nine years in prison in the 1980s for fraud and robbery.

Unsurprisingly, America has been watching him for ages.

In fact, a declassified report published in January concluded the “likely financier of the so-called Internet Research Agency of professional trolls located in Saint Petersburg is a close Putin ally with ties to Russian intelligence” — however, they didn’t refer to him by name.It’s unclear what US authorities will do next. After all, if the reports are true, he could be one of Donald Trump’s biggest allies.

Remember, kids, when Donnie, Jr., Paul Manafort, and Jared Kushner met with Russian lawyer Natalia Veselnitskaya to talk about adoptions and definitely not sanctions?  Just a co-inky-dinky that the “chef” was under sanctions, right? As for Julian Assange, I stuck him in the poster, because he’s an asshole, and I hate his fucking guts.

10 responses to “Cooking up a rigged election”