A Cheesy Move in Wisconsin

The Wisconsin State Assembly approved a bill Thursday that would slash union rights for public workers. The vote comes a day after the state Senate used a legislative maneuver to pass the bill without the 14 Democratic senators who fled the state in an effort to block it.

The bill, proposed by Republican Gov. Scott Walker, is considered the most devastating blow to labor unions in many years and in the last three weeks has drawn thousands of union supporters to the state Capitol in protest. The measure passed the Assembly, 53 to 42. 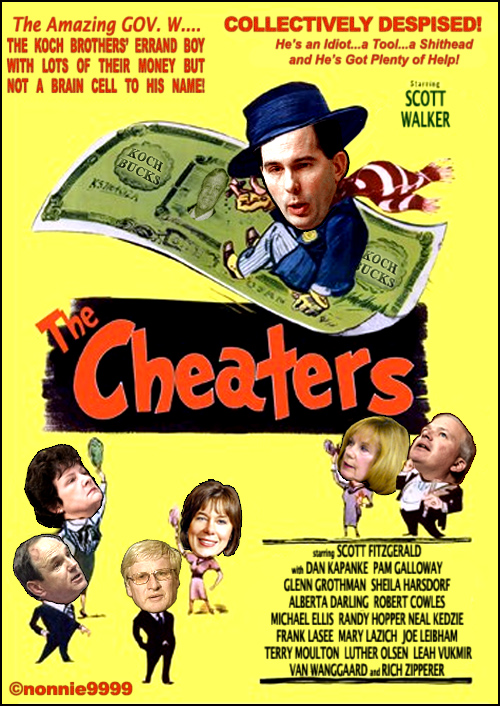 Earlier Thursday, the Democratic senators who fled Wisconsin last month to try to stall a vote on the measure said they were preparing to return to the state capital and fight back against what one of them called “political thuggery in its worst form.”

After stripping the bill of fiscal measures that require a 20-member quorum for action, Senate Republicans abruptly passed the measure 18-1. Republican Sen. Dale Schultz cast the lone no vote. Analysts say the bill would cripple most of the state’s public employee unions.

“They acted more like a third coup than a democratic institution that has long been revered,” Jauch said in a telephone interview Thursday.

He said that because the vote was over, there was no reason for the senators to remain out of state.

Walker said that he’ll sign the legislation “as quickly as I can legally,” AP said.

In statements Thursday, Assembly Minority Leader Peter Barca said: “Today citizens are being hauled from the lobby outside chambers, some media are allowed in while others are barricaded out, representatives and citizens are barred from the building; this is the atmosphere as we approach the start of floor session today. Republicans have made a mockery of democracy.”

Jauch, the Democratic senator, declined to elaborate on discussions about what actions the Democrats would take when they returned but said they were considering “legal action.”

He added that the Democrats might offer resources to the recall petitions already circulating for the Republican senators who were involved in the vote.

“Their reckless behavior shows contempt for the citizens of Wisconsin, and it is now in the hands of citizens to take the necessary political action to recall Republican lawmakers,” Jauch said.

The White House reiterated its condemnation of the legislation on Thursday. President Obama “believes it is wrong to use those budget problems [of states across the country] to denigrate or vilify state employees, and he believes the actions taken last night violate the principles he laid out,” White House Press Secretary Jay Carney said in a press briefing.

The measure to curtail union power has been followed similarly in other states, including Ohio and Indiana.

The legislative maneuver used to pass the bill in Wisconsin was met with outrage by Democrats and their allies, and they vowed that Walker and state Senate Republicans would pay with their jobs.

Walker, however, appeared undaunted as he applauded the Senate’s action.

Though Wisconsin’s budget problems are modest when compared with those of other states, Walker said the bill was necessary to ensure the state’s fiscal future.

Union leaders say the bill’s impact would be devastating to their organizations. But they also are calculating that Walker has gone too far. Activists have launched recall campaigns against eight Republican state senators, efforts they hope will culminate next year in a recall campaign directed at Walker.

GOP activists also are targeting some Democrats for recall. But polls show that though most people support reining in public employee benefits, they oppose stripping unions’ collective bargaining rights.

“By stripping out the fiscal items and leaving only the elimination of collective bargaining, the governor has exposed himself as a fraud,” said Jauch said Wednesday. “Tonight he has guaranteed that the people of the state of Wisconsin are going to stay engaged until this government changes.”

National Democratic activists are hoping that the battle in Wisconsin energizes their supporters and creates energy for them that carries into the 2012 presidential election.

The governor’s aggressive approach appears not to be playing well with Wisconsin voters, who elected him with 52 percent of the vote last fall.

A Rasmussen poll last week found that 57 percent of likely voters in Wisconsin disapprove of the job Walker is doing, while 43 percent approve.

The plan to pass the measure went into motion Wednesday, when state Sen. Scott Fitzgerald, leader of Wisconsin’s 19 Senate Republicans, called a conference committee of legislative leaders from both houses with just two hours’ notice.

As some onlookers shouted “shame, shame,” the committee passed the streamlined bill over the heated protests of Minority Leader Barca (D). “This is clearly a violation of the open meetings law,” said Barca of the meeting.

Barca said that state law requires 24-hour notice for public meetings, unless there is “good cause” not to provide it. But Republicans ignored his complaint, passing the measure out of the conference committee over his objections.

Speaking to reporters afterward, Barca called the maneuver “a continuation of a pattern of naked abuse of power” by Wisconsin Republicans. “They trample on democracy.”

He added that he was referring the action to the attorney general and was going to meet with fellow Democrats to seek other ways to stop the action. “This will not stand, that is one thing I will predict,” he said.

This is the list of senators who voted yes (the ones followed by and asterisk are eligible to be recalled):

If you’d like to throw a few bucks into the effort to recall these asswipes, click on the T-shirt:

12 responses to “A Cheesy Move in Wisconsin”