House conservatives engaged in political theater today, storming the floor after Congress was adjourned “to attack Democrats for leaving town without doing something to lower gas prices.” Politico reports, “At one point, the lights went off in the House and the microphones were turned off in the chamber, meaning Republicans were talking in the dark.” 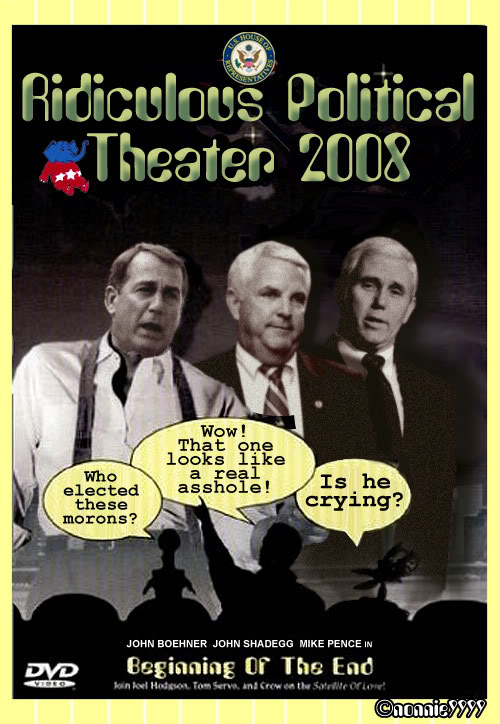 Boehner strong-armed his own conservative members to ensure a bill didn’t pass because he wanted to engage in today’s political theatrics. After killing a bill that would have addressed gas prices, House conservatives have decided they want to blow hot air in the dark.

Rep. Adam Putnam (R-FL) said, “This band of brothers here is staying late to make a point to the American people: We want to work.” His colleagues then chanted: “Work, work, work.” Putnam has quickly forgotten the conservatives’ record of leading the Do Nothing Congress in 2006.

Band of brothers? 🙄 This little $hithead is 33 years old. If he really wants to be in a “band of brothers” then why hasn’t he enlisted?

Rep. Tom Price (R-GA) finally brought the six-hour talk-a-thon to a conclusion today by leading the group in an a capella rendition of “God Bless America.”

Last Friday, they stormed the floor after Congress adjourned “to attack Democrats for leaving town without doing something to lower gas prices.” Today, Rep. Steve King (R-IA) brought to the floor a “large garish photo” of House Speaker Nancy Pelosi (D-CA) with the words, “I am trying to save the planet” written beneath it.

Here’s are some of the très dramatic lines these bozos came up with for their little theater of the absurd:

– “Without your help we won’t be able to do anything…like the founders of this country we’re going directly to the American people.” [Rep. Tim (sic) Price (R-GA), 8/4/08]

– “Tell your congressman- we don’t want you back home. We want you in Washington. This could be America’s greatest hour. Insist that we come back to vote.” [Rep. Don Manzullo (R-IL), 8/4/08]

The White House has rejected calls from House Republicans that it convene a special session of Congress on energy, saying it wouldn’t make a difference.

“We don’t have plans to call Congress into session — it won’t make a difference if Democratic leaders are unwilling to bring up a bill for an up-down vote,” said White House spokesman Tony Fratto.

Oh really, Captain Underpants? This from a guy who hasn’t cast a vote in the Senate since April 8th? But let’s continue…

About 20 House Republicans re-launched their floor action after a short press conference where no questions were taken. The speeches to visitors and staff in the House gallery began at about 10 a.m. Monday.

In an attempt to build momentum and steer more listeners into the chamber, GOP leadership staff sent e-mails to colleagues encouraging them to bring their tours to view the protest.

Members said they planned to continue their floor action through this week and possibly through the month, depending on member participation.

Rep. Tom Price (R-Ga.) officiated over the parade of members and encouraged listeners to call the Capitol switchboard and ask to speak to Pelosi’s office.

No members of the GOP leadership attended Monday’s demonstration, but Minority Whip Roy Blunt (R-Mo.) will attend the protest on Wednesday and Thursday, according to his office. Minority Leader John Boehner’s (R-Ohio) staff indicated he would try to attend at the end of the week despite a flurry of campaign appearances across the country.