How can we miss you if you won’t go away?

Hey, kids, didja read the news today? POLITICO is reporting that    Paul Ryan is   thinking about putting down his Speaker’s gavel and walking away from D.C. at the end of his term. If the tax cut bill that will enrich the uber-wealthy and destroy the middle class goes through, and he succeeds in decimating Medicare and Medicaid, then he will consider his job done. He wants to go home and  spend more time with his  family. But wait, there’s more! 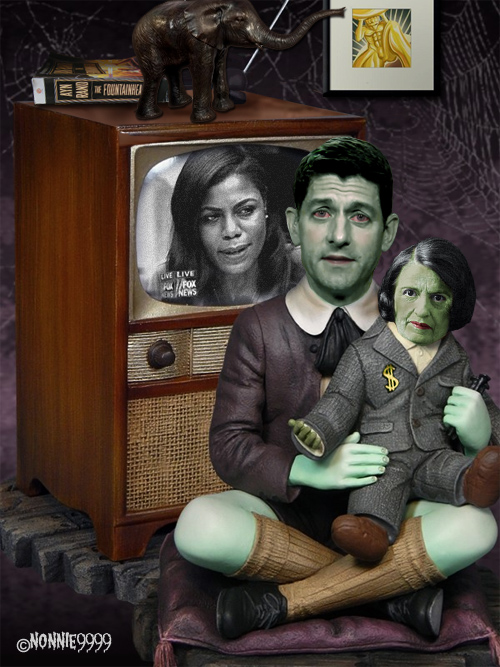 At the other end of Pennsylvania Avenue at the White House, someone else  decided to leave. The Apprentice  star  Omarosa Manigualt-Newman is walking away from her very important position. The Honorable Omarosa served as the director of communications for the White House Office of Public Liaison . At least, that’s her story. From THE HILL:

According to a report from CBS News, Manigault Newman tried to enter the White House residence after chief of staff John Kelly told her that her employment in the administration would end in January.

April Ryan, a journalist with American Urban Radio Networks, reported during an on-air appearance with CNN that “everything blew up” when Kelly attempted to discuss Manigault Newman’s walk-in privileges and access to Trump.

Ryan reported Manigault Newman saying that “all hell will break loose” if she lost walk-in privileges. Kelly, according to Ryan, said “OK, all hell is going to break loose.”

The Secret Service said it was not “involved” in removing Manigault Newman from the premises, but said the agency deactivated her credentials.

So what does this all mean? Well, for one thing Twitler, who doesn’t have a loyal bone in his bloated body, is a fucking moron for allowing a nosy fame-seeker like The Honorable Omarosa, who doesn’t have a loyal bone in her body, to wander around the White House taking notes. For another thing, the taxpayers will be paying her salary even though she’s not even allowed in the office. It also means that The Honorable Omarosa will tease the media about all the dirt she has on everyone in the White House, but she won’t tell them what it is, because if she did, then she wouldn’t get to be on TV anymore, and she wouldn’t be able to sell her tell-all book to the highest bidder.

So, if Eddie Munst…I mean, Paul Ryan is unleashed and no longer has to protect Twitler, will he tell whatever secrets he knows? And will The Honorable Omarosa get paid enough to spill her guts about what she saw not only in the White house but at The Apprentice? Will a couple of grifters help take down the biggest grifter of all? Poetic justice, if it happens.

8 responses to “How can we miss you if you won’t go away?”