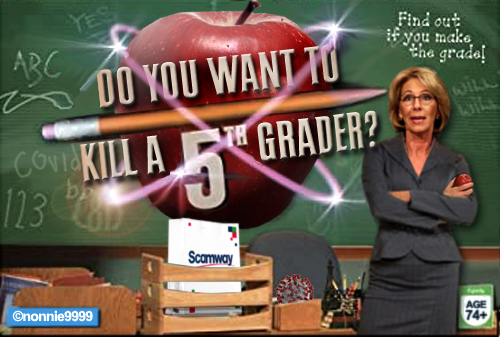 “If schools aren’t going to reopen, we’re not suggesting pulling funding from education but instead allowing families … (to) take that money and figure out where their kids can get educated if their schools are going to refuse to open,” Betsy DeVos told Fox News in an interview.

DeVos, a proponent of private and religious education who has long pushed “school choice,” gave no details on the administration’s plan.

U.S. schools are scrambling to prepare for the upcoming academic year as the pandemic surges nationwide, topping 3 million confirmed cases. President Donald Trump has called on schools to reopen, but there is no federal plan to coordinate the effort.

It was unclear how the administration planned to redirect federal education dollars. The U.S. Congress would have to approve any change in appropriations, which would likely face resistance by Democrats who control the House of Representatives.

House Speaker Nancy Pelosi said everyone wants to open schools “but it must be safe for the children.”

Most public schools are run and funded by local governments, with supplemental funding from the federal government. State and city budgets are hemorrhaging due to the economic slowdown during the pandemic.

While the highly contagious and potentially fatal disease appears to be less harmful to most younger people, its full impact on youth or their ability to transmit it remains unclear.

But DeVos argued schools can safely re-open now, something echoed by some of Trump’s fellow Republicans in Congress.

“If we can work to reopen bars, restaurants, and casinos, we can work together to responsibly open our schools and day cares,” House Republican leader Kevin McCarthy said.

But health experts have said the restart of such economic activity has driven a wave of new cases, particularly in Texas, Florida and Arizona.

Many people are wondering, as White House reporter Brian Karem asked Twitler’s spokesliar, “Kayleigh [McEnany], if it’s safe to send people back to schools, is it safe to send Manafort back to prison?”

Of course, there was no mention of the health of teachers, janitors, lunch ladies (sorry if that’s sexist), school office workers, school bus drivers, etc.