Gonzogate: The Story That Never Dies

WASHINGTON — Thousands of pages of internal e-mail and once-secret Congressional testimony showed Tuesday that Karl Rove and other senior aides in the Bush White House played an earlier and more active role than was previously known in the 2006 firings of a number of United States attorneys.

Aides to former President George W. Bush have asserted that the Justice Department took the lead in the dismissals, which set off a political firestorm that lasted months. Mr. Rove played down his role in the firings in a recent interview and in closed testimony last month before Congressional investigators.

But the documents, released by the House Judiciary Committee after a protracted fight over access to White House records and testimony, offer a detailed portrait of a nearly two-year effort, from early 2005 to 2007, by senior White House officials, including Mr. Rove, to dismiss some prosecutors for what appear to be political reasons.

Cruel and the Gang

Kids, are you confused about all the Chimpy White House scandals? Too many to keep track of? Well, the good folks at Slate have made life a little bit easier for you. They have a wonderful post with an awesome graphic that sorts out the Crimes and Misdemeanors of Chimpy & Company.

A former candidate for the Justice Department’s honors program is suing for $100,000 in damages, alleging Justice officials violated his rights and those of others when they brought political bias into vetting honors-program applications.

The class action by Sean Gerlich — filed Monday in U.S. District Court for the District of Columbia — is the first suit resulting from an internal Justice report issued last week that says two former Justice officials illegally screened applicants to the honors and summer intern programs.

The two officials were Esther Slater McDonald, then counsel to the associate attorney general and now an associate at Seyfarth Shaw, and Michael Elston, then chief of staff to Deputy Attorney General Paul McNulty and now a partner at McGuireWoods.

Al Fredo is going back to Capitol Hill today!! Chairman of the Senate Judiciary Committee, Patrick Leahy (D-VT), sent Gonzo a list of questions so he would be able to refresh his Swiss cheese memory before coming to testify. The title will give you an idea of what it covered:
Leahy Sends Attorney General Questions In Advance Of Judiciary Panel’s Oversight Hearing
…Judiciary Chairman Seeks Answers On U.S. Attorney Firings, NSL Abuses, Domestic Surveillance Program, Internal DOJ Probes, Among Other Matters
Woohooooo!!!!! 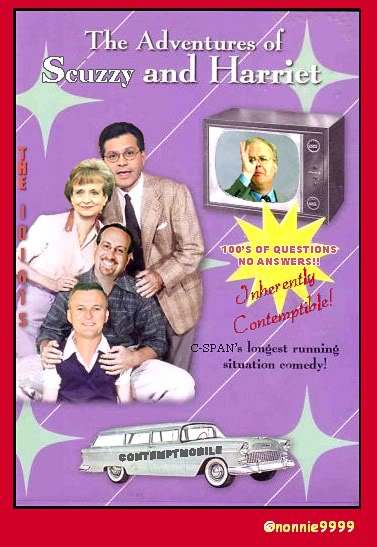 They’ve Been Working on the Railroading

All kinds of new poop headed down the tracks in the runaway train that we so lovingly call Gonzogate. The Senate Judiciary Committee questioned Wan Kim, the current assistant attorney general for civil rights about reports that 3 minority women in the DOJ’s civil rights division were shunted aside to “make room for some good Americans” (you can thank Kim’s predecessor, Bradley J. Schlozman, for that little gem), and assistant Attorney General Paul McNulty was back in the hotseat in front of the House Judiciary Committee rebutting Monica Goodling’s version of the facts.
From the Washington Post:

In the Senate yesterday, Democrats seized on the report that Schlozman had, while acting assistant attorney general for civil rights, removed the female lawyers — against their supervisors’ advice — as new evidence that the Justice Department under President Bush has been infected by improper political considerations.
…snip…
Rep. Bill Delahunt (D-Mass.) described McNulty as the “caboose” in the firings process and said he had been unfairly singled out for blame. “I think you were poorly treated,” Delahunt said.

Al Fredo might think that he is driving this train….

Original book cover.
….but we know who the real engineer is…..

Birds of a Feather…

So here’s the story. Tim Griffin, protégé and pastier version of Karl Rove, recently tearfully stepped down as U. S. Attorney in Arkansas. He replaced Bud Cummins, one of the victims of the shitstorm known as Gonzogate. Anyhoo, a couple of senators on the Judiciary Committee want to know what Timmy had been up to during the 2004 presidential election. There’s this activity known as “caging“, a form of voter suppression. Seems that Timmy was not too cagey about covering up his caging activities, and he accidentally sent evidence of his unlawful tinkering to the wrong email address. Monica Goodling knew all about it and has said that Paul McNulty, former deputy Attorney General, knew about it, too. Op-Ed News tells it much better that I can. Go on over and read it. I can wait….
All done? Good. Isn’t this the most fun scandal ever?! It’s comedy gold!!

Original movie poster.
By the way, it’s been about a century or 2 since I took French in high school, so I have no idea if I parlezed le francais correctly or not, but, hey, it looks okay on the poster, and that’s all that counts. Right?

Gonzo Throws McNulty Under the Bus

On Tuesday, Attorney General Alberto Wuss Gonzales showed his true colors. He put the blame for the firing of U. S. Attorneys on Deputy AG Paul McNulty, who had tendered his resignation Monday. Gonzales looked almost giddy as he said:

At the end of the day, the recommendations reflected the views of the deputy attorney general. He signed off on the names.

Comments Off on Gonzo Throws McNulty Under the Bus

Meanwhile, at the Justice Department…

Deputy Barney Fife Attorney General Paul McNulty, mired up to his eyeballs in the shitstorm of Gonzogate worried about his family’s future, has tendered his resignation effective late this summer:

“The financial realities of college-age children and two decades of public service lead me to a long overdue transition in my career.”