Is this what happens when you put a CEO in charge of state government?

Those experienced in dealing with the cranky, suspicious class known as hardcore news reporters know the best way to get journalists to do something, is to tell them they can’t — and vice versa.

So it’s hard to understand why anybody in Gov. Rick Scott‘s office thought journalists would actually accede to their request that all photos of the new governor be supplanted by an official photo they distributed Monday [Click link to see the official pic].

The email sent to news outlets said: “Please forward the attached photo of Governor Rick Scott to the appropriate people in your organization who handle graphics, layout and design.  Please use this photo of Governor Scott, rather than any others you may have on file.” 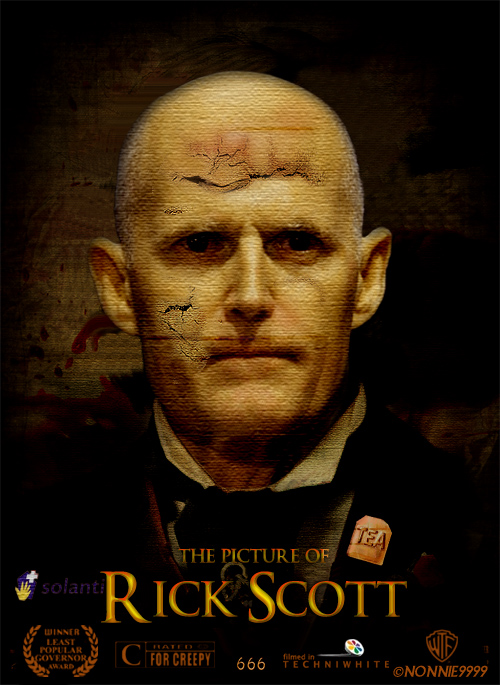 Beyond the odd, controlling nature of the request, it’s not even a photo of the governor in a suit and tie, which makes using the image for more official stories a tough sell.

Scott’s office may want to soften their boss’ image, but he is still the state’s top government official; photos in a suit and tie are pretty necessary.

Then again, considering some of the other photos out there of the governor, perhaps it makes sense to send one out that provides the exact look you need.

Too bad we’re not going to use it that often.

Soften his image, indeed. From The New York Times:

Gov. Rick Scott, a Republican conservative, took office this year on a promise to shake things up. That he did, and now the aggrieved — teachers, prison workers, food stamp recipients, doctors — are plastering him with lawsuits.

The lawsuits have rolled in over the past few months, making Governor Scott as popular in the legal sphere as he is at a Tea Party meet-and-greet.

On Tuesday, he lost a round. The Florida Supreme Court concluded that Mr. Scott “overstepped his constitutional authority” and “violated the separation of powers” when he suspended all proposed rules until he could review and approve them. It was the governor’s first executive order. A majority of judges stated that Mr. Scott encroached on the State Legislature’s authority when he opted to unilaterally freeze rule-making.

But the governor has many more chances to vindicate himself in court.

He is being sued for requiring state agencies to test job applicants for drugs and conduct random screening on existing employees (none are taking place pending the outcome of the suit).

Florida doctors and their lobbyists are suing him to block a law that hampers their ability to ask patients about guns in their homes. The law states that any question about guns must be relevant to the patient’s case.

Three unions representing state workers, including the teachers’ union, filed a class-action suit against the governor for taking 3 percent of their salaries and shifting the money into the pension system. The unions say the state violated its contractual obligation to the workers and broke the law. At the same time, the union that represents state correctional officers is suing him in the hope of derailing a plan to privatize 30 Florida prisons.

Also pending is a lawsuit that challenges the governor and his administration over the establishment of a new voting law, which would among other things tighten rules on third party registration, until the Department of Justice completes a full review.

Last week, Citizens for National Security jumped in the fray. The volunteer group, which monitors national security and extremism, sued Governor Scott over a new law that changes the way textbooks are reviewed and selected. In particular, the group is concerned about how religions are depicted in the textbooks.

Lane Wright, a spokesman for Mr. Scott, played down the lawsuits, saying it was not exactly surprising for a new governor to be sued.

But Howard Simon, executive director of the American Civil Liberties Union of Florida, said the governor had earned the title of lead defendant in the suits because of his disregard for the Constitution, the legislative branch and courts. The A.C.L.U. is party to several of the lawsuits.

“And there is more coming,” Mr. Simon said. “He has to take ownership and responsibility for bad laws.”

But Mr. Simon did concede: “It’s not only him. You’ve had an out-of-control Legislature.”

At the root of this, Mr. Simon said, is the governor’s failure to make the transition from corporate chief executive to governor.

“Government doesn’t operate in the way that you wake up one morning and you issue an edict and you expect everyone to jump,” Mr. Simon said. “There is shared power. He is not used to sharing power.”

And that’s why the criminal in the governor’s mansion is the most unpopular governor in the country.

38 responses to “Picture This!”