Vladimir and the Three Bushes

(CBS/AP) Russian President Vladimir Putin is in Maine, a houseguest at the Bush family home in Kennebunkport, Maine, enjoying the local seafood and blueberries and a speedboat ride with President Bush and Mr. Bush’s father, former President Bush.

Papa Bush told Georgie Bush that he has been such a good boy, listening to Uncle Dick Cheney, and making lots and lots of money for Papa Bush and his friends in the Carlyle Group, that he can have a sleepover!!! Georgie Bush was very excited, and he invited his friend Vlady. Papa Bush took Vlady for a helicopter ride. Georgie Bush had to stay home with Mama Bush. I bet he was disappointed he didn’t get to go in the helicopter, but Papa Bush made up for it by taking both boys for a speedboat ride.
After a big day of rides and of Georgie staring into Vlady’s eyes to see his soul, Georgie Bush and his friend Vlady were exhausted. I bet they didn’t even put up a fight when Mama Bush and Papa Bush tucked them into bed! 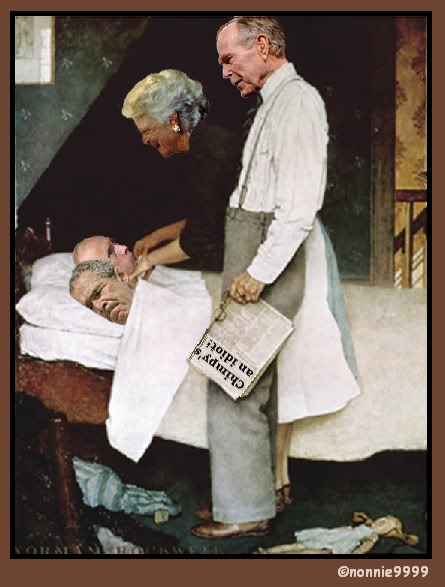 Original painting, with sincere apologies to the wonderful Norman Rockwell. By the way, the painting is ironically named Freedom From Fear. 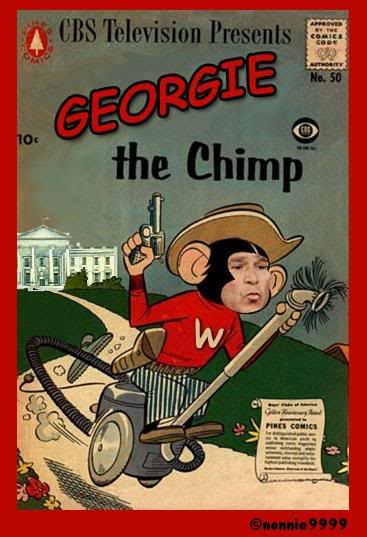